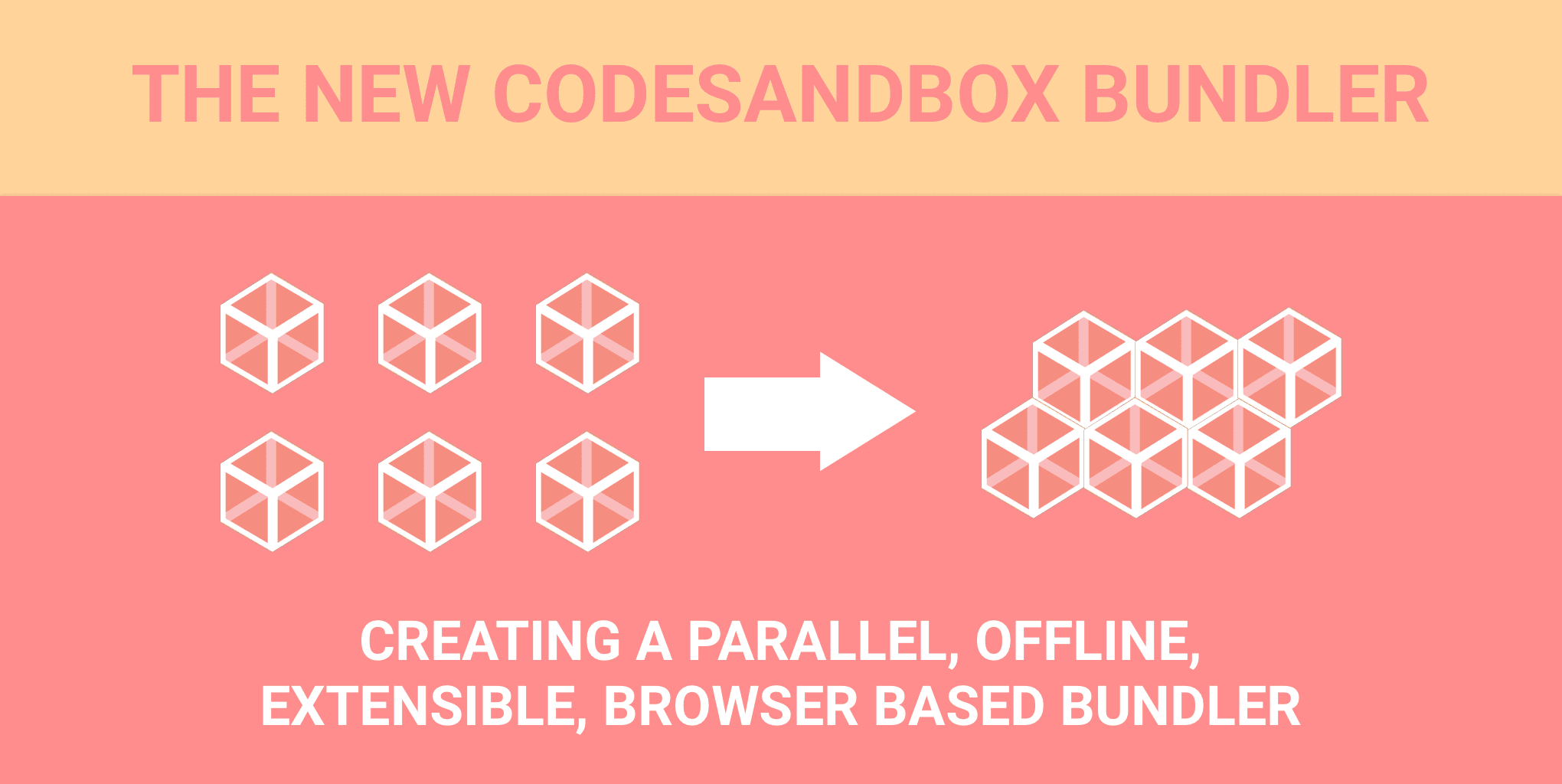 When I first started CodeSandbox, I was completely focused on React development. We even named it 'ReactSandbox' at first, but I changed it to CodeSandbox last minute so we could expand to other libraries. I'm proud to say that we now succeeded in that regard!

The past week we slowly rolled out support for other libraries. We now have support for React, Vue and Preact templates and are planning to support Angular, ReasonML and Svelte (let me know if you have other suggestions). To make this happen I had to rewrite the bundler from scratch. In this post I will explain mostly how the new bundler is built and what decisions I took to get there.

The first bundler we used was very primitive: for each requested file we would first transpile it, evaluate it and then cache the result. When a file changed we would just throw away the cache for all files dependent on that file and start over again. This worked for Babel, but wouldn't work for other loaders that need asynchronous transpiling like Sass. Creating transpilers for e.g. Vue turned out to be even harder in the old system. It was evident that I had to rethink the bundling process if we want to support libraries like Vue, plus it would give me the chance to improve the bundler.

webpack in the browser

My first idea was to make webpack work in the browser. Almost all existing CLIs already use webpack and it would require no work to add a new loader if it already works with webpack. Exporting to a webpack.config.js for the download function would also be effortless and users would be able to provide their own config. Sounds like the perfect scenario, right? For me as well! It sounds too good to be true, and it turned out to be.

I got webpack running in the browser, however the bundle size was 3.5MB uglified. I had to provide many polyfills and compilation threw a dozen warnings because of dynamic requires. Furthermore, only half of the loaders worked. webpack assumes a Node environment, and it turned out that the cost to simulate that environment was (in my opinion) too big for the advantages gained from it. My second reason is that CodeSandbox is a very specific platform, and if we build the bundler ourselves we can completely optimize for that platform.

webpack Loader API in the browser

My second idea was to write my own bundler, but with a loader API very close to webpack. The advantage of this is that the bundler "feels" like webpack, but is optimized for a browser environment. Writing loaders would be very easy; we can just take an existing webpack loader, strip all SSR, Node and production logic away and it should work in CodeSandbox. Another big advantage is that we assume a browser environment, so we can abuse browser APIs like Web Workers, Service Workers and code splitting!

For the actual implementation I tried to achieve the best of both worlds: close loader API surface with webpack and full optimization for CodeSandbox. It should work faster than first bundler, work offline and it should be extensible. The final bundler distinguishes three phases: configuration, transpilation and evaluation.

The new bundler has been built with templates in mind. For every template we have (currently React, Vue and Preact) we define a new preset. These presets contain configurations you can also find in a webpack config: aliases, default loaders and default extensions. The function of a Preset is to return what loaders are used for a file type, and how files are resolved. The Preset for Preact looks like this:

Transpilation is the most important phase. Like the name implies: it does transpilation, but it's also responsible for building the dependency graph. For every transpiled file we traverse the AST, search for all require statements, and add them to the tree. This doesn't only happen to .js files, it also happens for TypeScript, Sass, LESS and Stylus files. The advantage of building the tree during transpilation is that we only have to build the AST once.

Transpiled output is saved in a TranspiledModule. One file can be associated with multiple TranspiledModules, because files can be required in different ways. For example, require('raw-loader!/Hello.js') isn't the same as require('/Hello.js').

🤓 How much can moving Babel into a web-worker impact perf? Here's an example of processing a large UMD file while scrolling around the page. pic.twitter.com/OtjLvcDYoI

Every loader is dynamically loaded based on their usage. If your sandbox only contains JavaScript files, we will only download the Babel loader. This saves a lot of time and bandwidth, since transpilers tend to be very big.

One of the requirements of the bundler is to work offline, that's why all the unused loaders are still downloaded in the background by a service worker. There are no external dependencies while working on a sandbox, so after downloading the transpilers it can bundle offline whenever wherever.

Although I've called this bundler a 'bundler', there is actually no bundling happening! We already have access to all the code, so the only task left to do is evaluation of the correct file. The entry point gets evaluated using a simple eval, we provide a stubbed require that resolves the correct TranspiledModule and either evaluates it or returns the cache if it exists.

The output of transpilation and evaluation are cached. When a file changes we throw away the transpilation of that specific file and compilation of that file and all parents (all files requireing that file). From that point we transpile and evaluate from the entry point again. I put HMR into quotes, because this is not the same implementation as the real HMR solution. We don't have ​module.hot​, because it would take a setup to make HMR work in a sandbox and I wanted it to work out of the box. (edit: we now do support ​module.hot since CodeSandbox 2.5!)

I'm proud of this bundler, as it allows us to do more and is also much faster than the previous version. With the new implementation we have the best of both worlds; we have a close API surface with webpack and it's optimized for CodeSandbox and the browser. It's of course not as advanced as other solutions like webpack, but it's perfect for CodeSandbox. It now doesn't take longer than an hour to add a new template and loaders are very easy to port from their webpack counterparts. This makes us very flexible in the future.

The performance has also improved with the new bundler. Initial load time can be pretty high, because the transpilers need to be downloaded. All transpilers are cached using service workers or browser cache though, so on second try it should be much faster. Initial compilation takes between 1 and 2 seconds on my Macbook 13" 2015, all recompilation takes between 35 and 40 milliseconds(!). These tests were run on the TodoMVC implementation of Redux. It's faster because transpilation now happens in parallel on separate threads and transpilation already starts while dependencies are being fetched.

If you want to see the real goods; you can find the source here. This is the Manager class, it's responsible for connecting the Sandbox, the Preset and all TranspiledModules.

The new bundler opens a lot of exciting possibilities. The two biggest are custom template support and full offline support.

We now have all these loaders like Sass and TypeScript, it would be nice if we could also unlock these for the React sandboxes. There should be a button to eject a sandbox, which enables you to specify loaders and things like custom Babel configuration. The main work for this has already been done, we only need the API to support it next.

Everything works offline already, but for full offline support we need to allow you to save sandboxes offline. This allows you to work offline on your projects forever, and upload to CodeSandbox whenever you'd like. The only feature that requires an internet connection are npm dependencies, but we already cache all npm results. We'll give you the option to precache combinations for when you're planning a trip or flight.