It's already been two months since we 'officially' released CodeSandbox with this article. In the article I started out with sharing some stats, so let's do this again for old times' sake.

CodeSandbox gained a surge of popularity after the last article. Two months ago we had 1500 sandboxes and 280 users, now we have 16000 sandboxes and 2300 users! We've been storing 1.3 million new characters of code each day. I can't state how incredible this is; it has gone above and beyond my expectations. I'd like to thank everyone for using CodeSandbox and reaching out to me.

What has been done

I want to start with a retrospect on what we have built in the last 2,5 months. We've gained a lot of feedback and thanks to that I was able to build a lot of new functionalities. Here are some highlights of the biggest changes:

You can now see what others are building on CodeSandbox, every user has a profile view that shows all their sandboxes. You can also 'like' other sandboxes and see how many views your sandbox has received. BTMPL's profile contains some great examples, and all his sandboxes are nicely tagged. 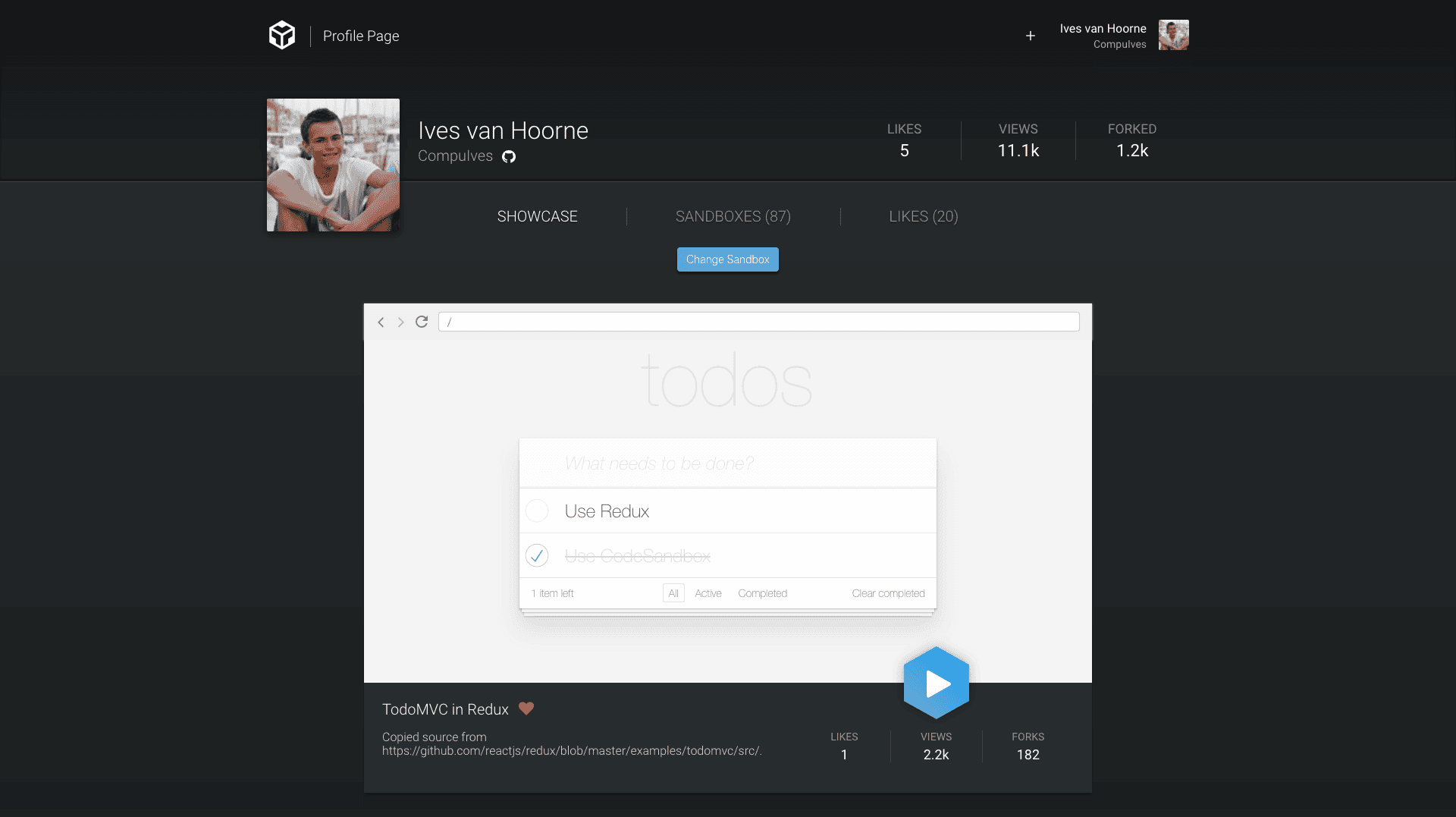 You can share a sandbox on platforms that support Embedly, like Medium. You can even edit the embedded sandboxes on there, which means that you can do some pretty creative things like a component tutorial on Medium with interactive examples.

After releasing CodeSandbox I got in contact with Christian Alfoni, the author of WebpackBin. Both our services have npm dependency support and we're both challenged with efficiently handling this. We decided to work together and build a common 'packager' for WebpackBin and CodeSandbox. The new packager is a lot smarter than previous versions and now supports features like CSS files and browser mappings. We wrote an article about it, which you can find here. Thanks a lot to Christian, he did an incredible amount of work on the packager and it's great working together with him.

Dozens of people reached out to us with ideas about CodeSandbox. Phil Holden also released a very interesting article about the use cases of an online editor like CodeSandbox. It inspired us and we realized that this tool has a lot more potential than just as a platform to share your creations. We've set two goals for the future development of CodeSandbox.

1. Make it so easy that a child can use it

I've received dozens of emails from people who are learning React using CodeSandbox, and this makes a lot of sense. With a tool like CodeSandbox you don't have to learn how bash works, or what npm is, or what 'node' stands for. You can just open a web page and start hacking away.

When you're just starting out, you want to immediately get started with the fun stuff instead of having to learn all these additional technologies first. Of course you'd need to learn them eventually, but having these obstacles at the beginning is discouraging when you just want to start building.

I, and I think more of us, suffer from the curse of knowledge, it becomes harder and harder to put ourselves in the position of a beginner as we know more. Things like the terminal and the editor become trivial and we forget that we were puzzling for hours over this.

Precisely because of this, we need to set a more ambitious, but relatable, goal: make web application development so easy that even a child can easily start learning it.

Congrats! My 8 year old is one of them (as am I). He uses it to play around in #React

I believe that the best way of learning is by trial-and-error. You'll remember better why you should apply a solution if you've experienced the error firsthand. This means that when a user makes an error, we need to show the best directions to a solution.

For CodeSandbox, this means that we need to focus on creating friendlier error messages and try to offer suggestions when an error occurs (like missing libraries). Configuration should stay to a minimum, and if we do have configuration we should offer the option to do this in a GUI.

There are a lot of improvements that can be made to make CodeSandbox a very user-friendly editor, even more so than other editors since we can assume the context the user works in. Let's use this to our advantage.

2. Make it a place for easily discoverable examples

Approximately 300 sandboxes are created on a daily basis. These sandboxes are built for a myriad of different purposes, but most of the time to share with others. There is no way to find sandboxes built on CodeSandbox, which is a real shame since we're sitting on a goldmine of valuable information.

Libraries are a great example. There already are awesome libraries like redux-form, glamorous, mobx, apollo-client, css-constructor, and react-day-picker that use CodeSandbox for error reporting and/or documentation. There is really valuable content written by the authors of these libraries, but we're missing a way to easily discover these libraries and examples.

There are dozens of sandboxes with lessons about React too. People use sandboxes to teach others about different concepts, like the difference between a PureComponent and Component. These sandboxes are often shared on Reactiflux or Twitter, but it would also be great if you could discover them via CodeSandbox.

We should have an advanced and performant search. This way you can, for example, easily search for a library and find all sandboxes which use that library.

Importing from GitHub was a much requested feature, and now it's here! The implementation is fairly simple, you can pick a GitHub URL, replace github.com with codesandbox.io/s/github and that path will point to a sandbox that'll automatically stay up to date with the git repository.

For now we only officially support create-react-app projects on CodeSandbox, this means that it most probably won't work with other projects on GitHub.

The CLI can be installed using either yarn or npm:

To upload your project, you can go to the directory of your project and run codesandbox /. This will upload the current directory and give you the URL of the sandbox. The source of the CLI can be found here.

There's a lot on the roadmap for this coming summer. I want to focus a big chunk of my time in making the editor more user-friendly. We also have a list of features that are going to be implemented in the coming months. Here's some of the highlights:

I'm very excited about this. We're working together with Algolia to add search for sandboxes. This will help a lot with adding discoverability for sandboxes. A concrete example: let's say you want to know how to use redux-form. With the new search, you can search for all sandboxes using this library. We're hoping to turn CodeSandbox into a central place for finding React examples. This feature will also allow you to tag sandboxes.

We're also working together with Vercel to integrate deployment with sandboxes. There'll be a 'Deploy with Vercel' which will deploy a production-ready version of your application using the magic of Vercel. This is really cool, because now, you'll finally be able to build applications on CodeSandbox from start to finish. This has already been done before, but the deploy step was missing. The people at Vercel are incredibly helpful and it's really great to see that we're sharing the same vision.

You won't be able to use the public folder when uploading using the CLI yet, because we don't have static file support. This is much requested and will be added soon, this will make it possible to use host images and other binaries right in the sandbox.

We've also got something called 'CodeSandbox Pro' in the works. This is to get some contribution towards the server costs for static file hosting and templates. We don't want to limit the overall experience, and hence, CodeSandbox Pro will be entirely optional. With CodeSandbox Pro, you'll be able to make private sandboxes and to use more storage for static files. The idea is that you can pay a monthly amount (which you can decide), and it'll be fine as long as you contribute more than a certain minimum amount. We haven't really decided on the minimum yet, but we'll make sure it'll be affordable.

Right now, we only support projects following the create-react-app template. We want to expand this to other templates, starting with vue-cli. You will be able to specify what template you'd like to use when creating a new sandbox. Based on that template the editor, and even the color (blue for create-react-app, green for vue-cli), will change accordingly. The main requirement will still be that there should be zero configuration to start a project, this applies for downloaded sandboxes too.

Sunil Pai gave a talk at React-Europe 2017 about the benefits of moving runtime logic to compile time, and I truly believe this will happen more in the future. You can already see that some css-in-js libraries are requiring Babel plugins to work. That's why there will also be a custom template where you have control over compilation. The webpack config and the .babelrc can be altered there. You can get it by ejecting an existing template. All of this is possible via either a simple, friendly GUI, or editing the code directly.

I'm very excited with the direction CodeSandbox is going. I know that what we have now is a great basis that we can both improve and expand on. Again, I want to thank the early adopters immensely for their usage and their feedback, we also have a surprise for you in store 😉.

We recently open sourced different parts of the application, check the repositories out and don't hesitate to open an issue or a PR!

On that note, don't hesitate to ping us with your ideas; they've helped us a lot in the past months. You can tweet or DM at me (@CompuIves) or shoot an email to [email protected].

Let's make CodeSandbox a helpful tool for web application development, both for beginners and experienced developers.