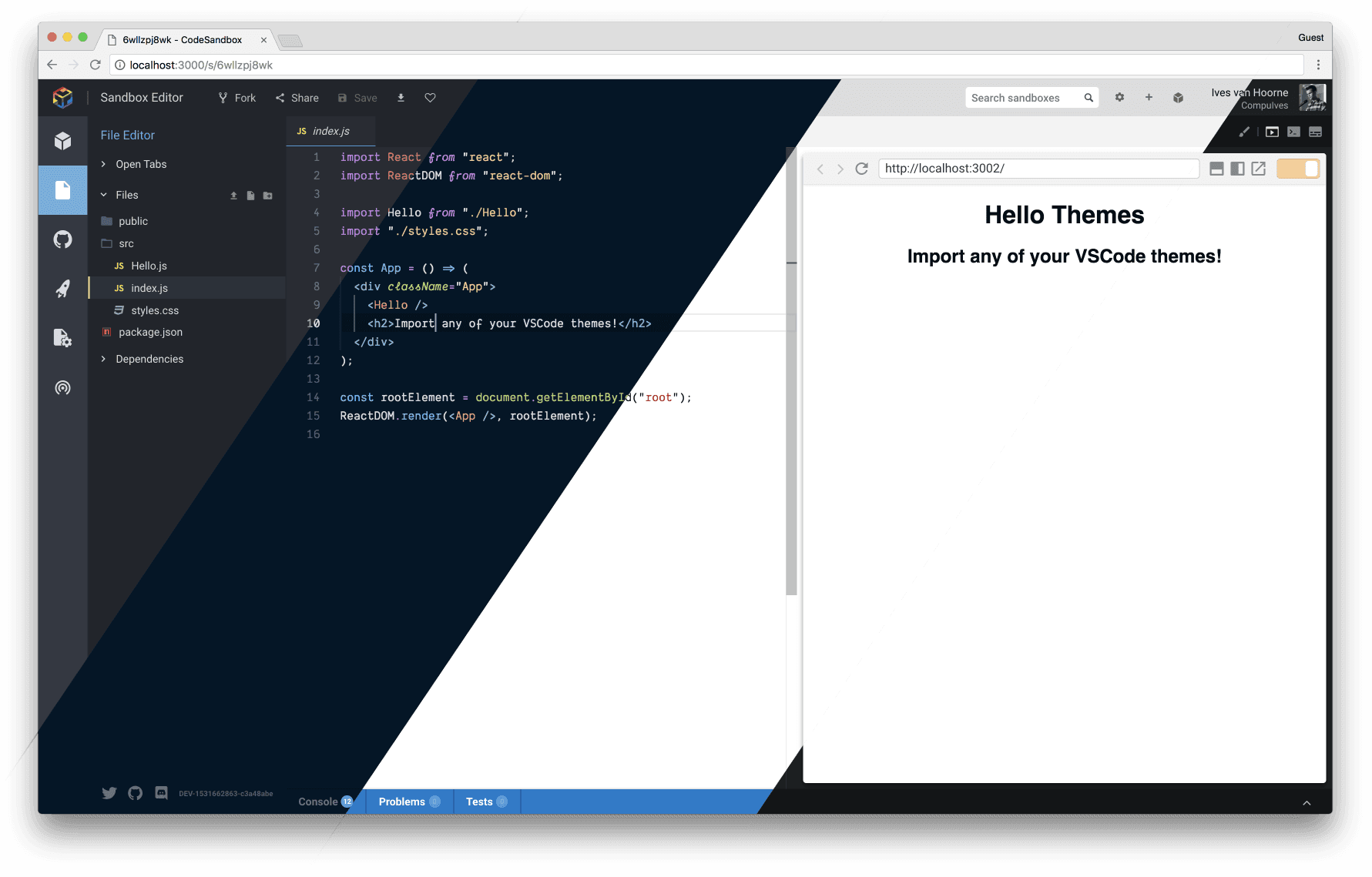 Personalizing color schemes is one of the most important things to have in an application. It's not only used as a way of styling to personal preference, it's also very important for accessibility.

CodeSandbox didn't have any way to personalize colors in the editor since release, but I'm happy to announce that we do now. The best part is that we were able to reuse a big chunk of logic from VS Code directly and thus we support any VS Code theme natively in CodeSandbox!

I will first highlight our pre-installed themes and fonts, then explain how to install your custom VS Code theme and I will end with an explanation on how it works (spoiler alert: WebAssembly).

We have made a selection of VS Code themes that we think are important to have 'pre-installed'. In reality we still download them on-demand, but you can easily make a selection between these themes without opening VS Code. If you have a suggestion for a pre-installed theme don't hesitate to open an issue! 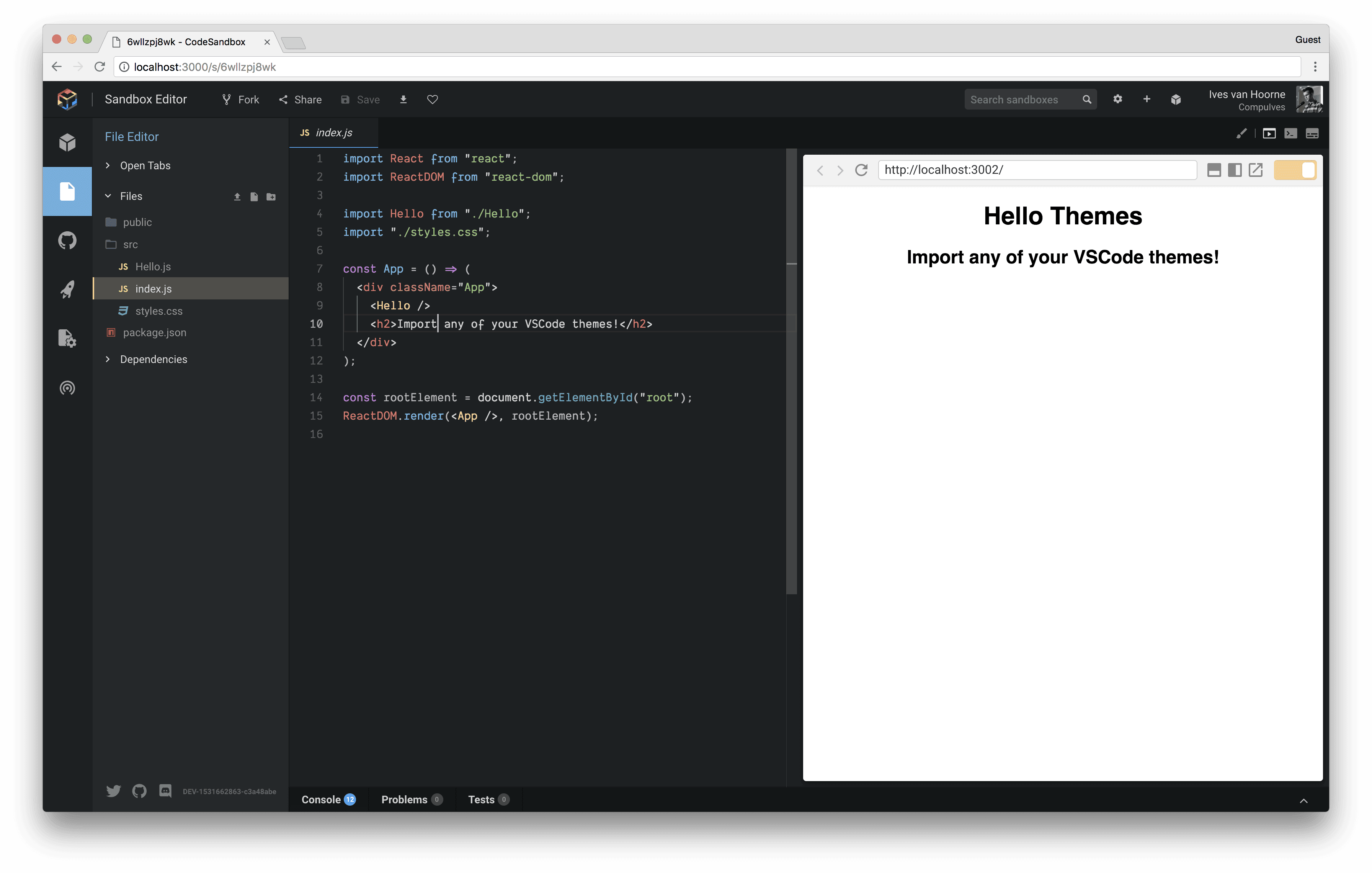 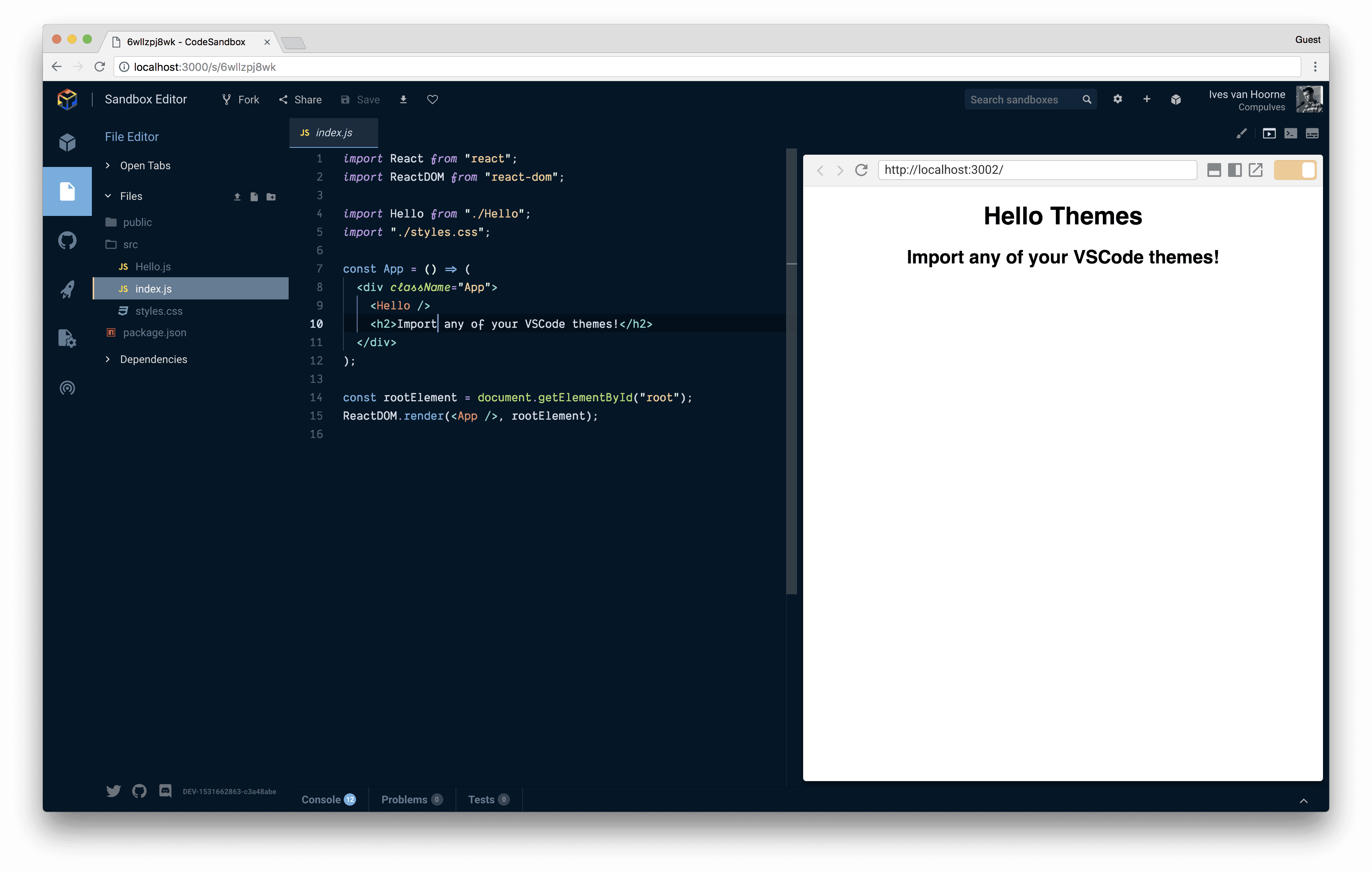 Atom One Dark by Mahmoud Ali 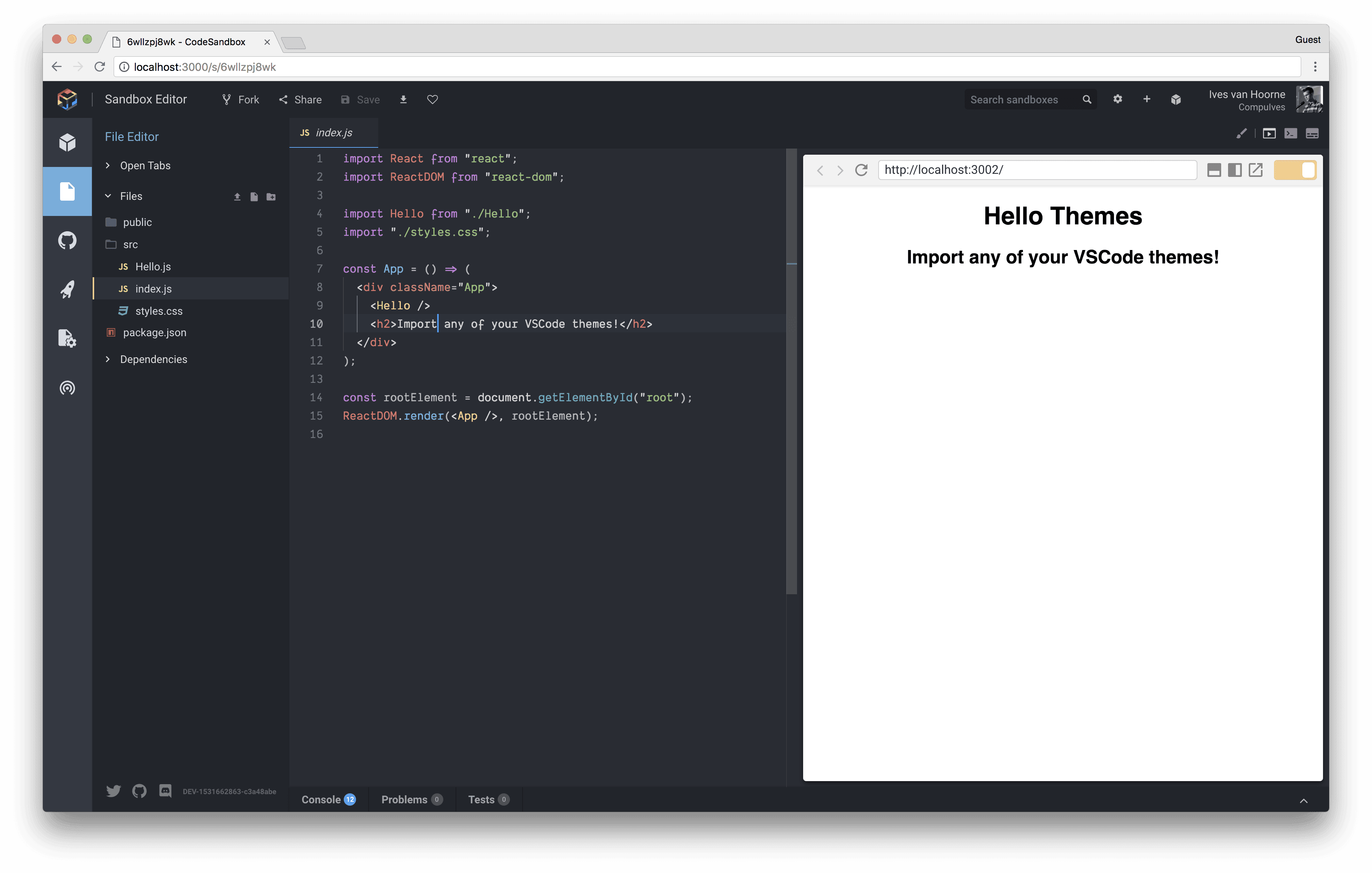 Atom One Light by Mahmoud Ali 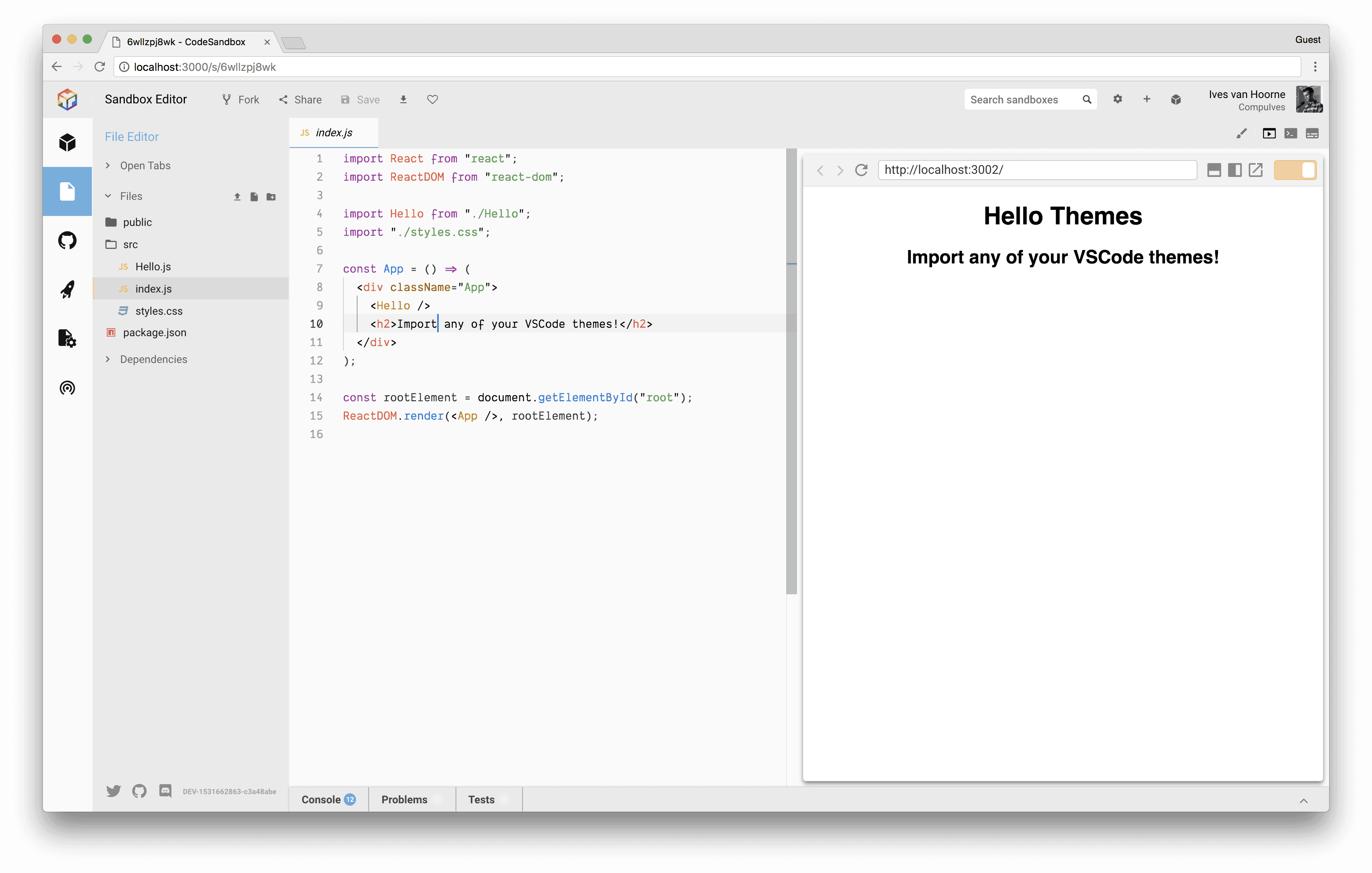 VS Code Light by Microsoft 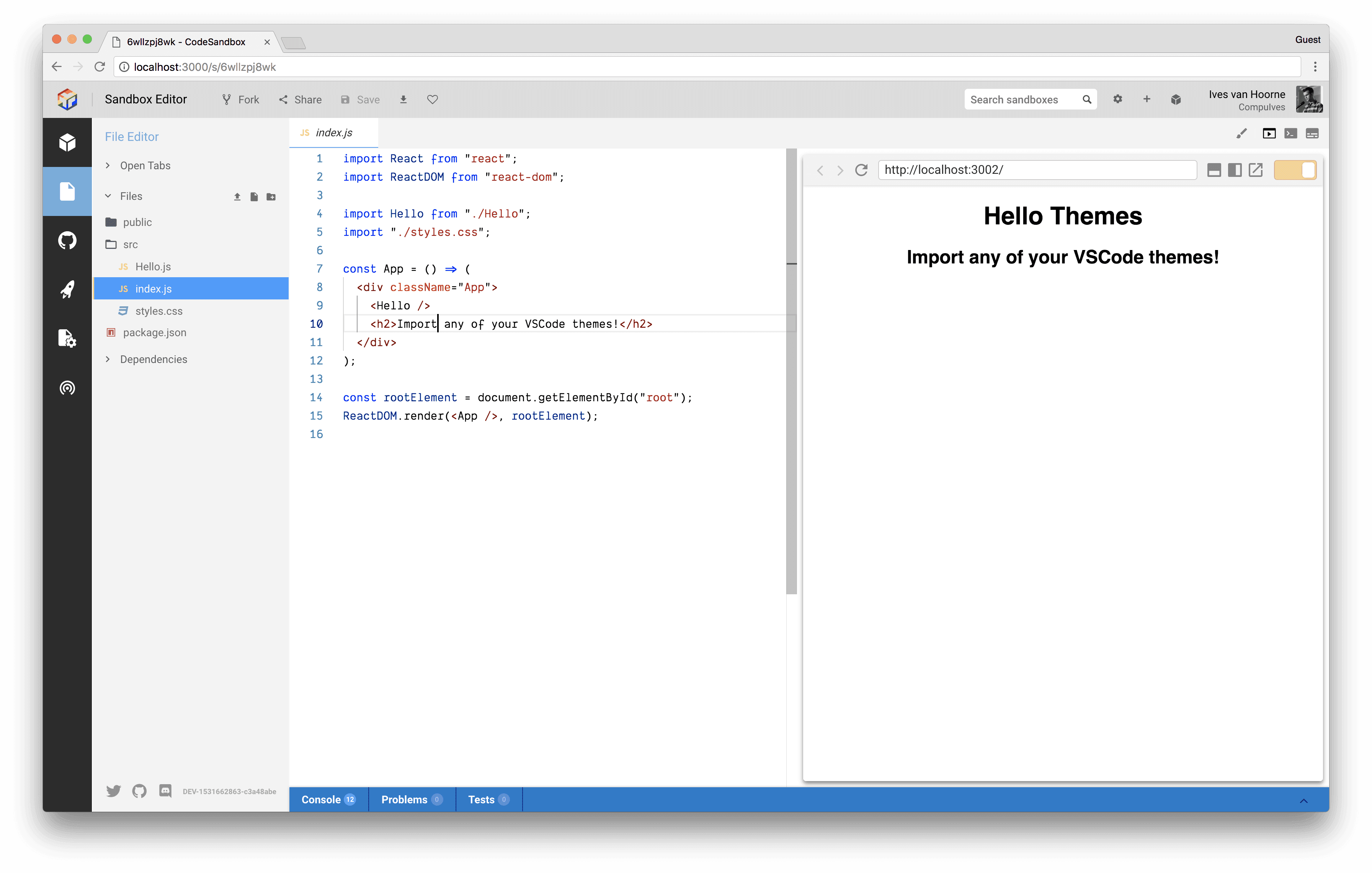 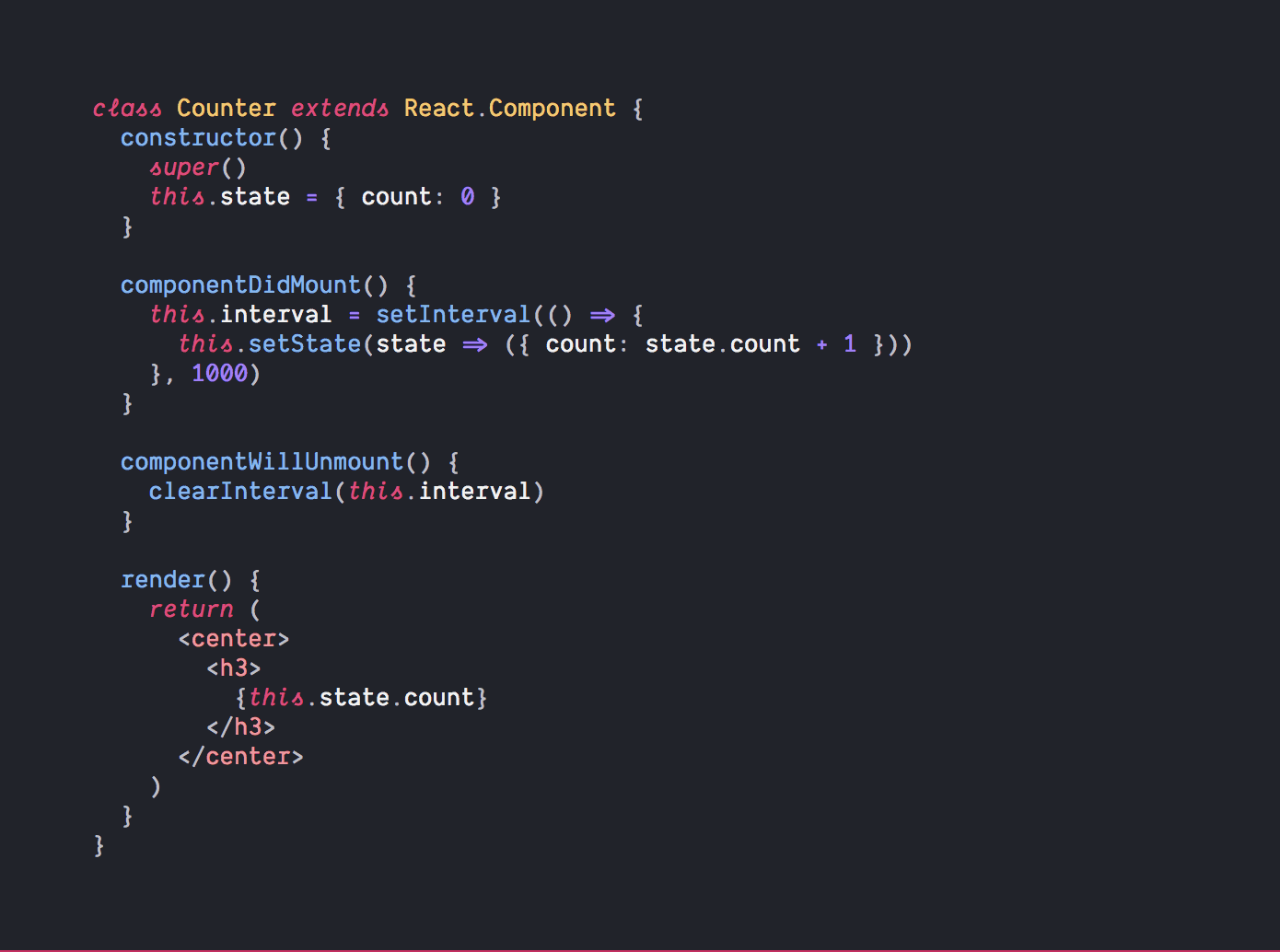 We now also enable Dank Mono as pre-installed font by default. This is an incredible font created by Phil Plückthun. It supports italics and font ligatures (you can enable those in preferences). He explains here what the design choices behind Dank Mono are.

You can choose between the fonts 'Dank Mono', 'Menlo' and 'Source Code Pro'. You also have the option to install any font that you have locally installed.

There are a few simple steps to move your own VS Code theme to CodeSandbox explained here:

Here's a GIF of copying over a theme:

CodeSandbox has been using monaco-editor as its main code editor for almost a year now. Monaco is the core editor part (the part where you write code in) of VS Code, and the team behind VS Code was so awesome to make this part work in the browser directly as well.

However, the syntax highlighting of VS Code uses .tmLanguage (from TextMate) to tokenize all the code. And parsing .tmLanguage requires a C library called Oniguruma to parse and execute the regular expressions, which has a specific syntax. That's why the VS Code team put in a different tokenizer into the browser version called Monarch. This tokenizer is not fully compatible with VS Code themes, which made it hard to directly port them over.

However, a year passed by and WebAssembly is gaining a lot of traction. We found out that a library called Onigasm (get it, OnigurumaASM?!) was released, this is a compiled WebAssembly version of Oniguruma with 1:1 support. Quickly after that I found out that the same author(!), Neek Sandhu, also published monaco-editor-textmate, which allows you to tokenize .tmLanguage files for Monaco!

This was enough information to make VS Code themes be supported directly in the CodeSandbox editor through the .tmLanguage tokenizer. The only thing we had to add was a mapping of the rest of the UI to the VS Code colors. We are using styled-components for styling, so that was a matter of putting the VS Code styles in the ThemeProvider and changing the style of all elements one by one.

We also updated monaco-editor to the latest version (we were on v8, which is a year old). Because of that we now get proper keyboard support for iPads in the editor. I also rewrote the logic in the editor itself, which now gives:

I want to give a huge thanks to Sara Vieira, she came with the idea to do this when we were on our way to Brighton and she helped tremendously in building and debugging this functionality. 10 👍 for her!