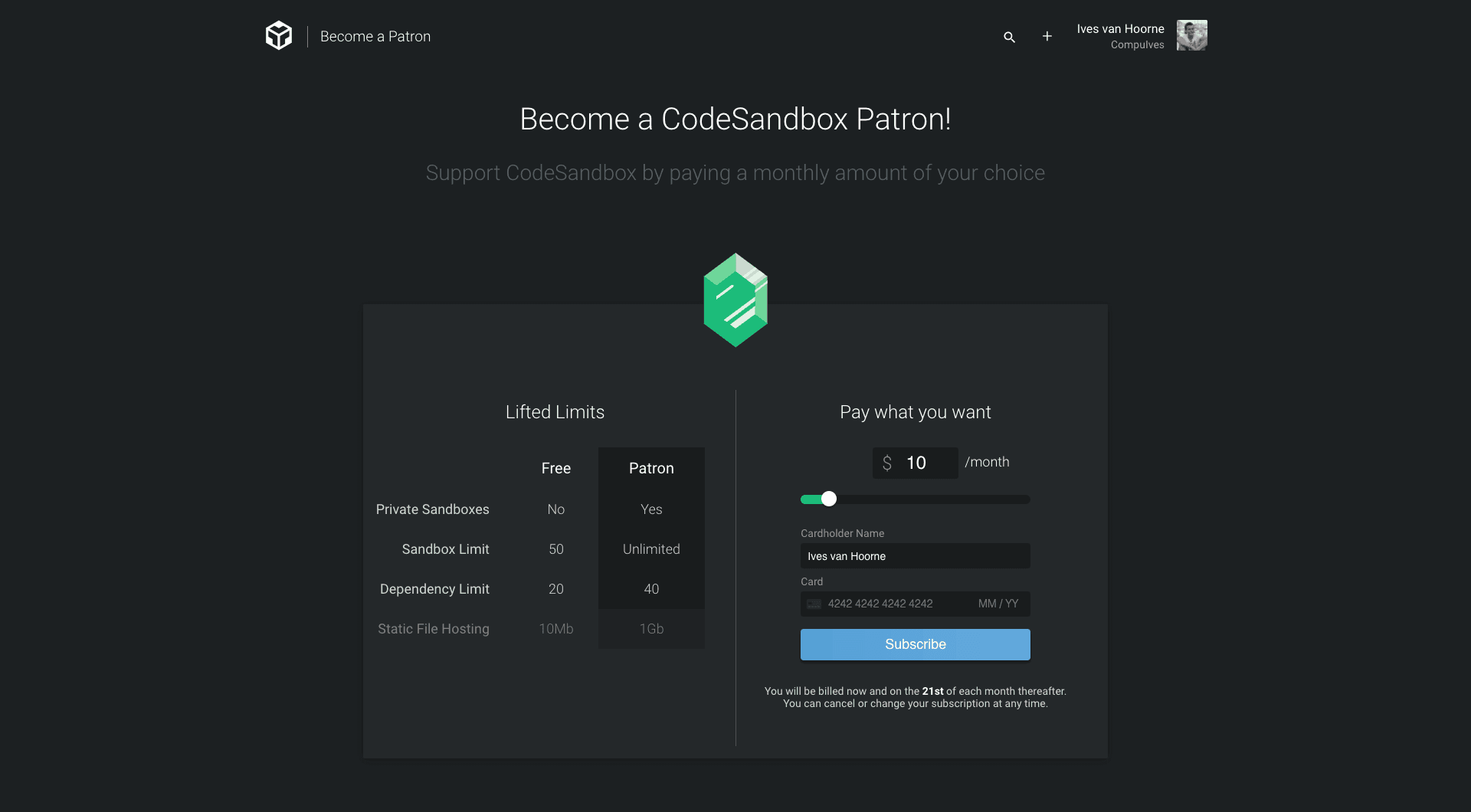 It has been only 3 weeks since our last article 'The Future of CodeSandbox' has been released. We haven't stopped working in the meantime and are proud to release our biggest update yet today! I wanted to dedicate a separate post for this update, since it wouldn't fit in a single tweet (or even two for that matter). It's good to keep everyone posted regularly on all progress and that's why we're starting a monthly post, explaining what big features have been built and what we will build.

What has been built

It's now possible to tag sandboxes, so you're able to sort and group them based on given tags. This is especially useful with the next feature.

Yes! I'm really excited for this feature. We now have search powered by Algolia. It's insanely fast, I was never able to exceed the 2ms in search time with 22,000 sandboxes. Integration was also much easier than I expected, it took me two days to do the backend and the frontend. 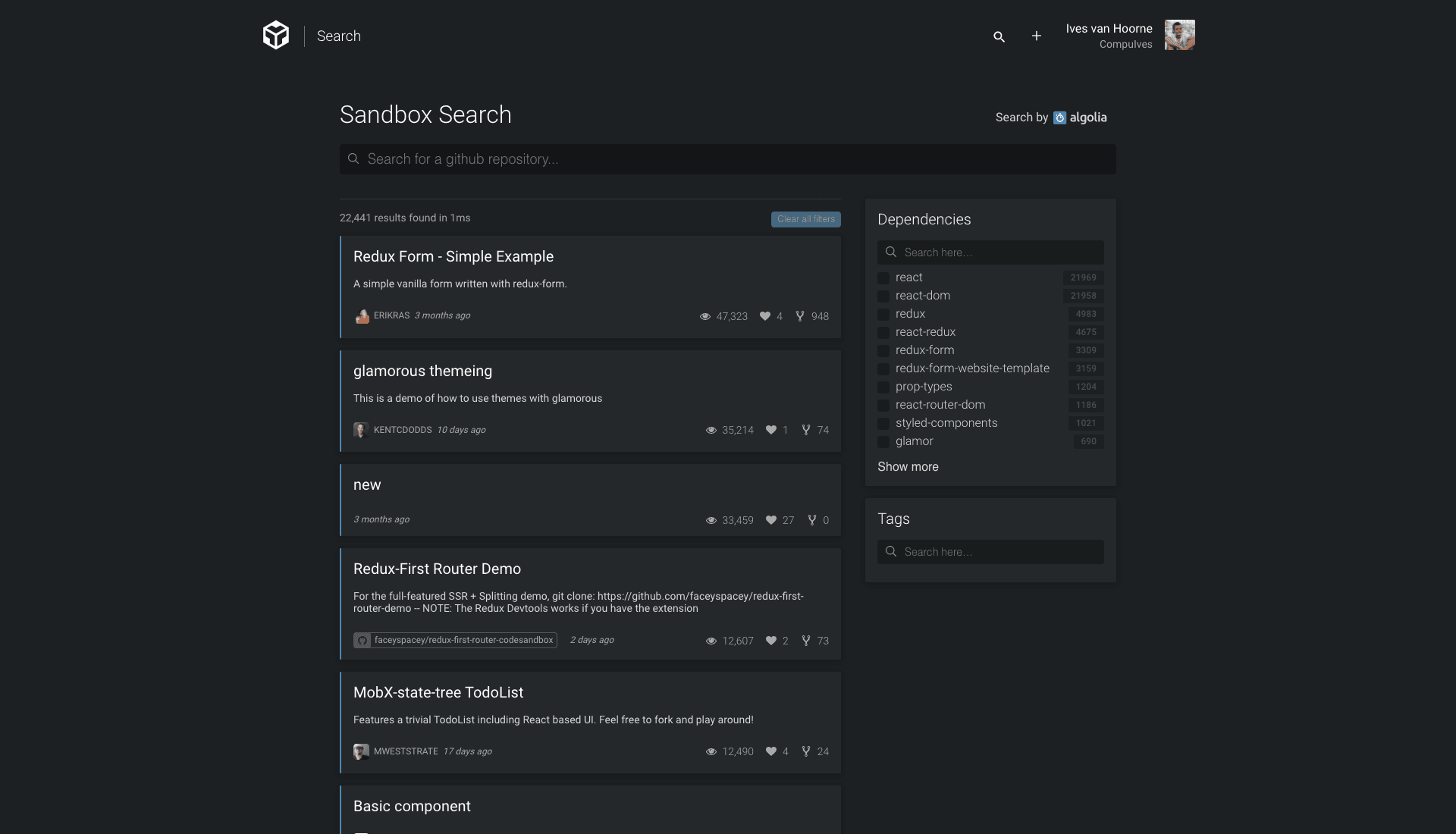 Search is really useful when you're searching for examples or inspiration. Do you need help with react-router-dom and react-transition-group? Well, now you can just filter on those dependencies and check the sandboxes out.

Not only is this useful for users, library authors now also have a higher visibility when users are searching for libraries. Search is also where tags shine, since you can also filter on tags.

The search isn't fully done yet, I also want to add 'Popular Sandboxes', 'Top of this week' and 'Top of this month' to increase discoverability.

You can now support CodeSandbox by becoming a Patron! You get a badge based on the amount you donate per month, which will be shown on your profile page. You can hide the badge in your preferences. The income will go to server costs and further expenses of CodeSandbox.

We don't want to split features between Patrons and free users, that's why mostly limits are lifted when you are a Patron. As you can see you can pay what you want, this goes from $5 to $∞. We handle all payments through Stripe, and we're also working on PayPal integration. You can find the patron page here.

As a Patron you can make your sandboxes either private or unlisted. Unlisted sandboxes are not indexed, thus others can only find them if they have the right URL. Private sandboxes are only viewable by you. You can find the privacy options under 'Sandbox Actions'. 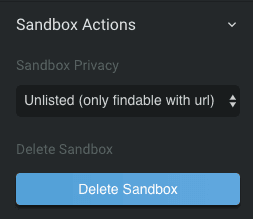 You can view your private and unlisted sandboxes on your own profile, but when others see your profile they can't see these sandboxes.

We now have a preferences modal with a fancy animation!

This opens up the possibility to have advanced preferences, like ESLint config, custom Prettier config and customized theming. We will also include more preferences. The design of the preferences modal is inspired by Discord and Stripe.

We will gradually add achievement badges to CodeSandbox, as a sort of reward for your support and usage. Bas Buursma has put a lot of effort in the design of the badges, and they turned out really beautiful! 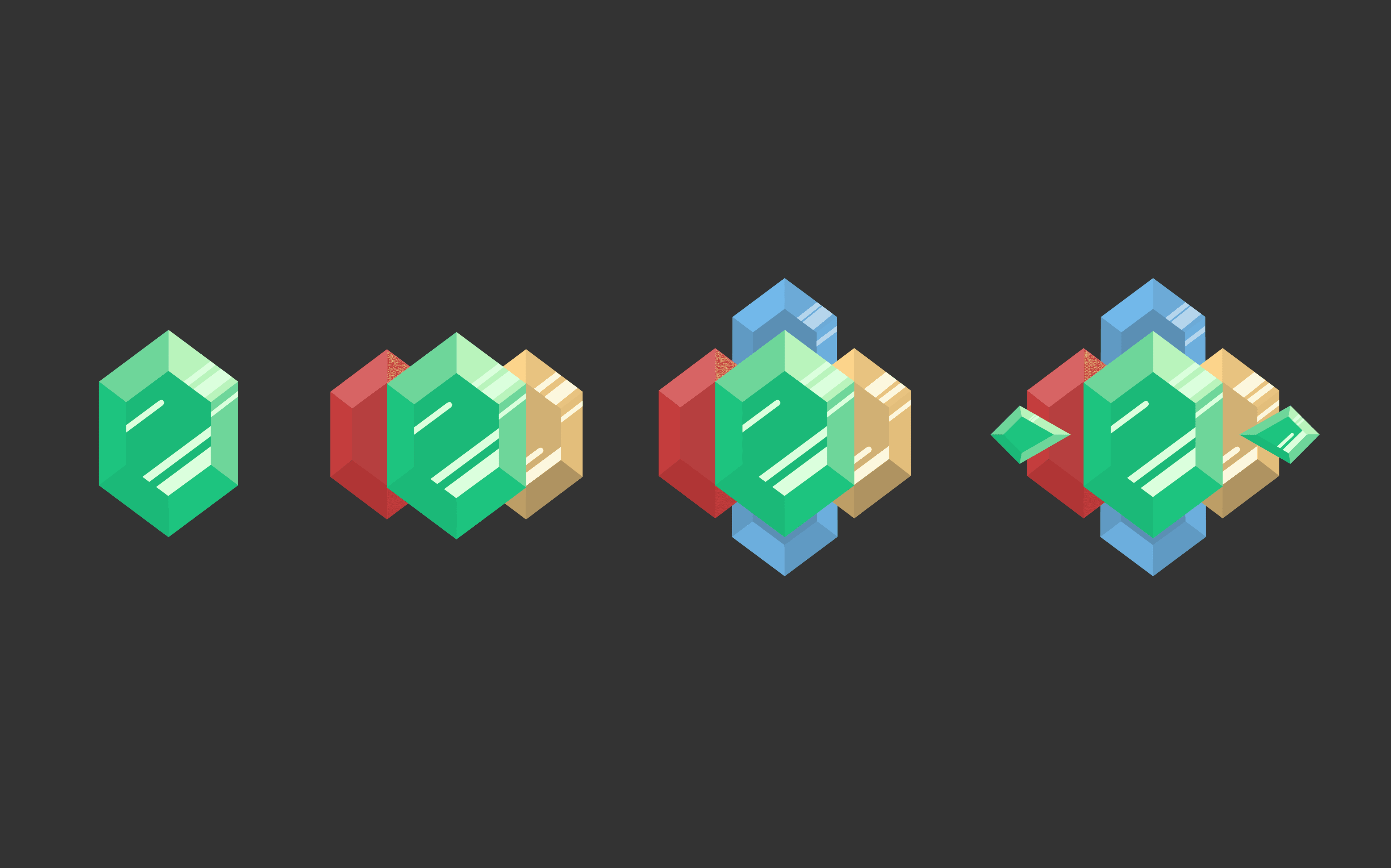 Throughout the coming months we'll build more badges and a separate badges page.

Hosting user created content is legally quite tricky. A Terms of Service and a Privacy Policy were long due and we've put a lot of time in writing one. You can read it here.

Last month was very focused on discoverability of the sandboxes. The coming month we will focus more on the editor and the preview functionality. I have 2 holidays in August (I'm lucky), so this could become a sprint of two months instead of one.

I've laid some thinking groundworks on support for custom extensions and renderers. The idea is that library authors can build devtools and custom renderers integrated with CodeSandbox.

The idea is that you can write a custom extension for CodeSandbox, where you can specify when the extension is activated, how modules are evaluated and what should be rendered. You can then add the extension via a PR to the main codebase.

We now have compatibility with create-react-app templates, and we want to extend this to other templates. This feature will be tightly connected to the custom renderer support, because both projects will be put in a complete rewrite of the sandbox. We're not planning to support ejecting in this sprint, that work won't fit in one sprint.

The Internals of CodeSandbox

A couple days ago I sent out a tweet gauging the interest in a post about how CodeSandbox is built:

There is far more than the web app that keeps it running 🤓. pic.twitter.com/3xUV6NPA9X

The response was really positive and better than I expected. I'm motivated to start writing about the internals of CodeSandbox and how different parts work together soon.

Remember, we're open source (partly)! I'd like to give a special thanks for our new contributors of the past month. ❤️

Also a BIG thanks to everyone else helping out by talking about and using CodeSandbox, we're really amazed by your positive response and support.

You can always contact us through my Twitter or by emailing us at [email protected]. Don't hesitate to say hi 😃.