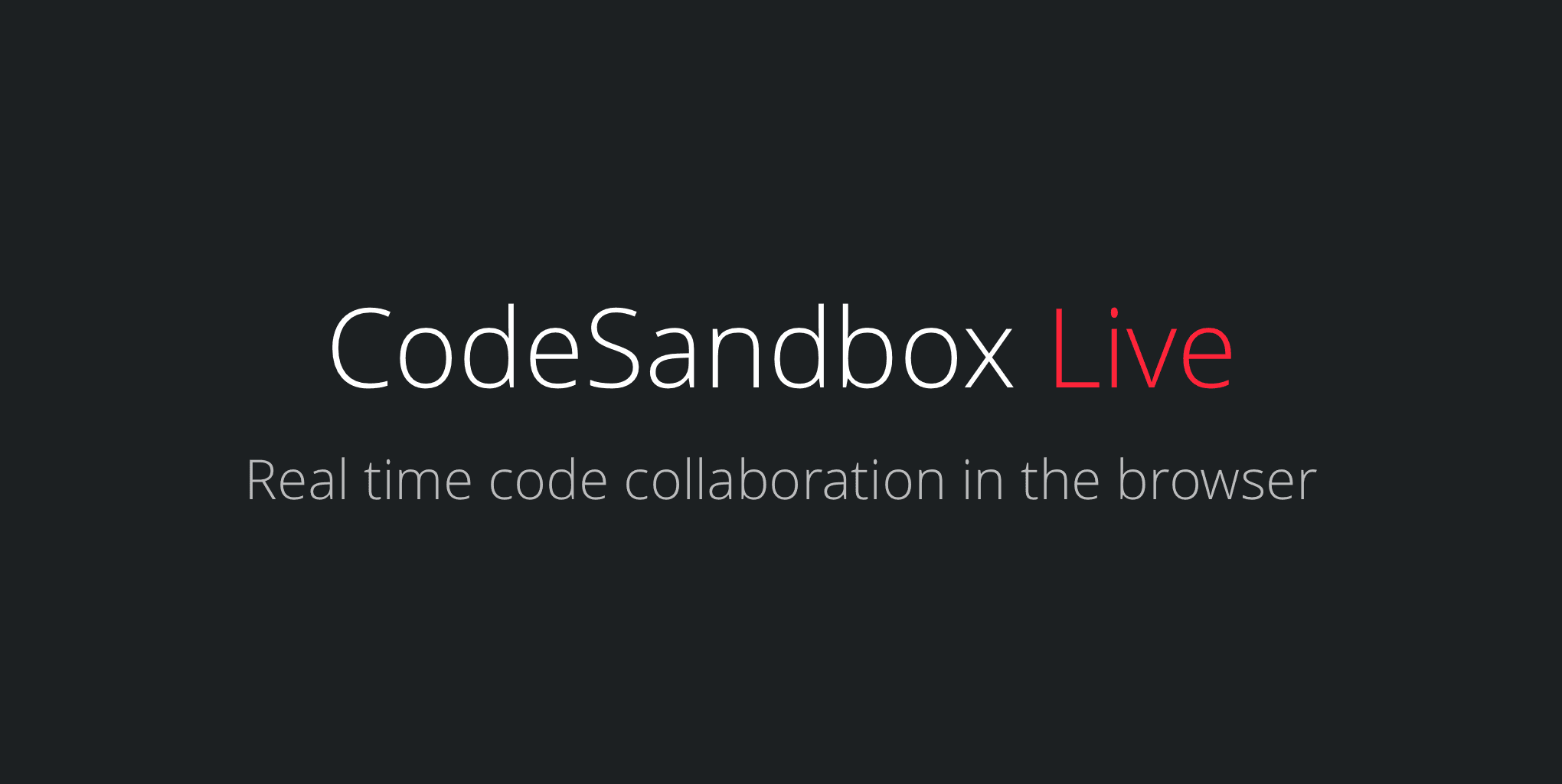 I started CodeSandbox with the ambition to make sharing and collaboration of web applications easier and more accessible. Nowadays it's being used for documentation, job interviews, prototyping, troubleshooting, bug reports, workshops, and probably much more.

Today we want to announce a feature that improves all existing use cases, but moreover will improve collaboration even more and allow for new ways to use CodeSandbox. It's called CodeSandbox Live (original name!).

You can see an introduction video to CodeSandbox Live here:

From now on you can open up your sandbox for real time collaboration. By clicking on the 'Go Live' button you will get a URL that you can share with others. They can then join your session and seamlessly collaborate live on the same sandbox with you. They will be able to create files, delete files, move files, write code, the whole shebang. You will see their cursors, selections and which file they're looking at, while still keeping your own editor features like IntelliSense.

Everyone can simultaneously change code in the same document, or choose to edit other files. We dynamically update selections, cursors and code based on the input of others, using Operational Transforms to resolve any potential conflicts.

Choose who can edit

CodeSandbox Live has two modes: 'Open Mode' and 'Classroom Mode'. The default mode is 'Open Mode', which allows everyone to edit. 'Classroom Mode' lets you select who can edit. This is especially useful for lectures and workshops where 30 students can look at the same sandbox. You will only see the cursors and selections of the people who can edit, the 'editors'.

Fork at any time

If someone wants to continue with their own version of the sandbox they can simply do that by pressing 'Fork' at any time. They can later join the session again if they want to.

It turns out that these kind of features are pretty hard to test by yourself or with some friends 😅. I tested this for a pretty long time without finding bugs, but we probably missed something. That's why we want to mark this as a beta for the time being. If you find any issues you can open up an issue on our GitHub repository. To test the load we've marked this feature as Patron-only: a live room can only be created if you are a Patron, everyone can still join created rooms.

There is no limit on how many users can connect to one live session, but we haven't tested bigger crowds yet. In the coming weeks I will share live test sessions and streams on my Twitter, everyone is encouraged to join them!

I'm really happy with the implementation of this system. In the frontend we're using parts of ot.js. On the backend we have our Elixir (Phoenix) server that runs a custom OT implementation together with ot_ex. Every live room is a separate Elixir process, and all state is stored in Redis to allow for temporary server disconnection or rolling updates. I will definitely write a more detailed post about this. There were some really interesting challenges, and many race conditions. It was one of the most fun features to build by far.

This feature has been a blast to build and test. I hope you'll have as much fun using CodeSandbox Live as I had testing it! Let us know what you think on the CodeSandbox Twitter or my Twitter.

If you're interested in the source of the frontend, you can find it here.