Already more than a week ago Bas Buursma and I released CodeSandbox: an online code editor with a focus on sharing projects in React. The response was beyond all my expectations: already more than 1500 sandboxes have been created and more than 280 users signed in via GitHub!

The idea of CodeSandbox started when I was on a trip to St. Ives (hah!). I was working at that time on the conversion of Catawiki to React. While I was gone I got a lot of questions from other developers about React, but there was no easy way for me to answer them without having access to an editor where I could access the libraries we have.

Simply said: CodeSandbox is an online code editor. It automates things like transpiling, bundling and dependency management for you so you can easily create a new project in a single click. After creating something interesting you can show it to others by just sharing the url. CodeSandbox features a live preview to show the result of the code while you're typing. The editor works with all JavaScript projects, but it has some React specific features, like the ability to download the project in a create-react-app template. 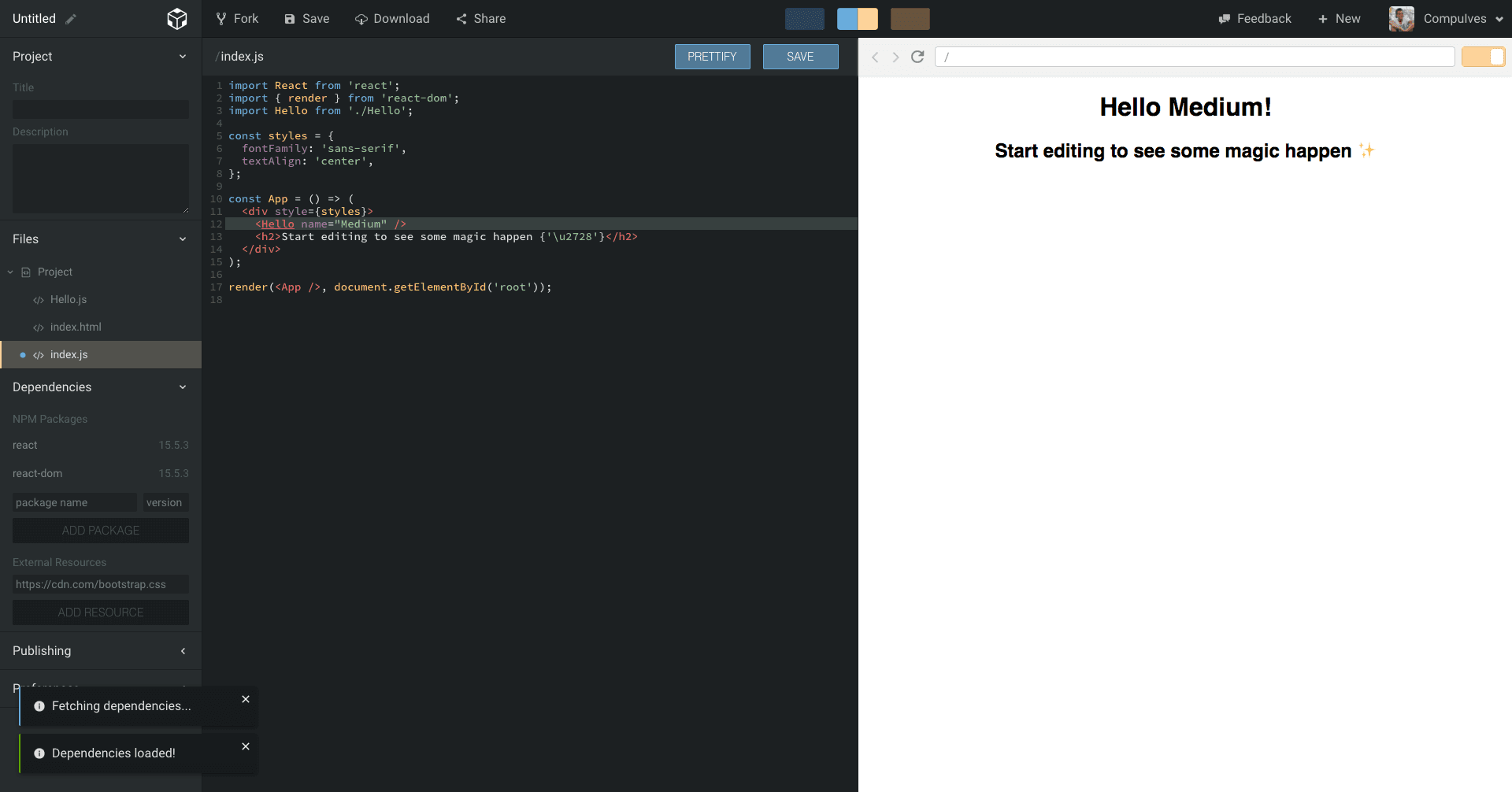 We've been working on CodeSandbox for the past 4 months, so there are a lot of things I built that I'd love to talk about. If you have any suggestions I'd also love to hear them! I will feature (pun intended) the biggest features.

This is really important for us since it should be easy to try out a library in a separate environment without too much hassle. We support npm dependencies by creating a dependency build on the fly for the specific combination of dependencies. WebpackBin does the same thing and I'm working at this moment with Christian Alfoni to build a service that we both can use. It's also possible to add external resources, like CSS and JavaScript files.

If you want to take your project out of CodeSandbox you can easily do that by clicking the 'Download' button in the header. You will get a zip file with the create-react-app template to work with. The package.json and index.html are generated for you. 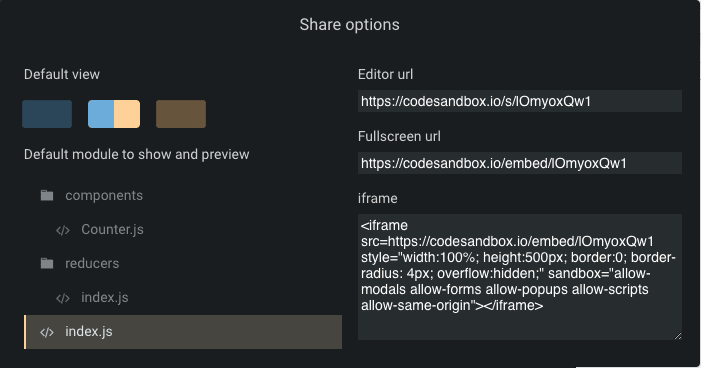 I've found these developer tools (especially Prettier) a requirement for me to work fast. You can enable or disable all of these in preferences. Prettify on save is enabled by default (you can still turn it off) because this ensures the same style between sandboxes and makes it easier to read the code of other sandboxes. ESLint follows the rules of the airbnb config, I want to make this a preference too in the future.

What we have now is the basis we need to build the initial plan. We built CodeSandbox with the idea that it should not just be possible to fork work from others. We want to exploit a feature of React that is extremely powerful: reusability.

It should be possible to easily turn your sandbox into a library that others can reuse in their projects. We never want people to lock in, so libraries created on CodeSandbox can also be installed locally. We actually support this already, but I decided to hide it before supporting some more community features that make it easier to share.

Libraries imply versioning, you should be able to commit versions and build further on a library without worrying about breaking anything. You can 'branch' by forking. We're still looking into options on how to start importing/exporting to GitHub.

Better user support It's possible to sign in and view your sandboxes via the menu in the header, but it's very limited at this moment. I'm building a profile view where people can showcase their sandboxes, others can then comment and/or favorite it. Sandboxes will get some more information, like how many views/favorites it has had and what other sandboxes forked it.

Impressive creations should stand out, it should be possible to feature sandboxes with many views or favorites on the homepage.

Library support will get its potential with this feature. When you build a sandbox you should be able to easily search for eg. 'Buttons' or 'Interactive Piano' and see a visual list of other sandboxes to import. The creator of the imported project will automatically be credited in the final project as 'contributor'.

CodeSandbox has been a great ride so far, the reactions have been incredible and the support has been immense. If you have any suggestions/ideas about CodeSandbox or the roadmap we'd love to hear them! You can access us by emailing [email protected] or by direct messaging @CompuIves on Twitter, we also watch the comments here.

I'd like to end this article by sharing some cool sandboxes that already have been created, we encourage you to share yours! 😉