CodeSandbox is often used to create new websites or to quickly edit existing websites. Until now this was only possible for projects that follow the default template layout, and if you wanted to change something like the webpack configuration you would have to continue locally. Well, not anymore!

Today we're happy to announce CodeSandbox Containers. We execute your code on a server, which allows you to work on any JavaScript project that works locally.

Want to try a new GraphQL API server? That's possible! Want to quickly add a new post to your Gatsby blog? You can do it from CodeSandbox with its GitHub integration.

Along with this update we'd like to announce new templates running on this system. Everyone can now work with Next.js, Gatsby, Nuxt.js, Apollo Server, Node and ReasonML right from within CodeSandbox! We give first-class support for these templates, but you will still be able to run anything you want on CodeSandbox. You can create a new project here.

Until now we've executed all code in the browser. This has many advantages: it's snappy, it works offline and there is almost no load for our servers. There is also a counterpoint to this: you won't be able to run node directly.

See what happens on the dev server

We introduce a new view for the toolbar called 'Terminal'. This view will show the output of yarn start when the sandbox starts. 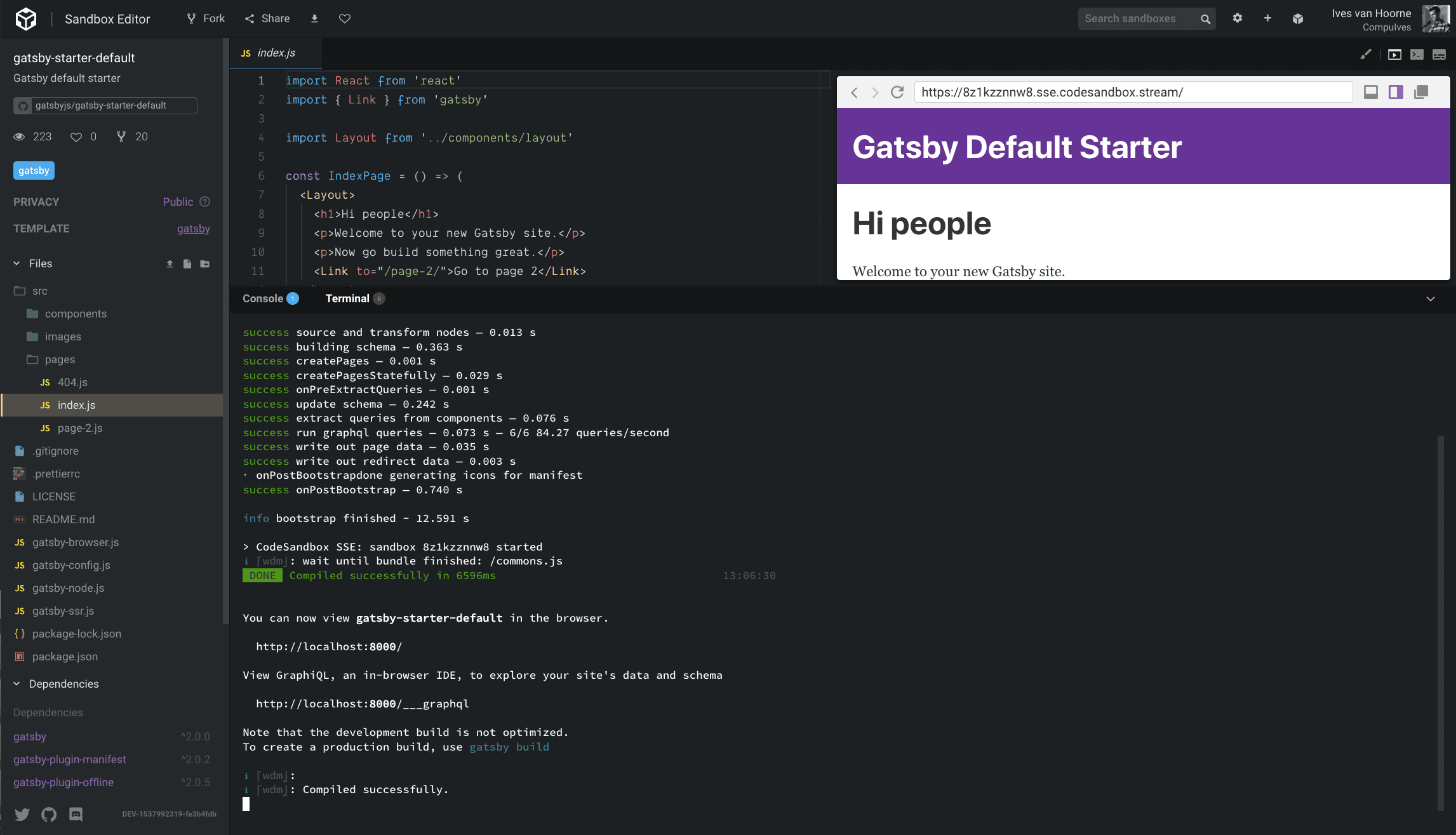 We also introduce a new panel in the side bar called 'Server Control Panel'. This panel gives you the opportunity to run any script specified in package.json in the terminal. With this you can quickly lint or run tests or any other script.

This doesn't only work for npm scripts. You can also open a bash shell to explore the sandbox! Note that we do monitor the sandboxes, if we notice any harmful behaviour we can block your account.

We hope you are as excited as we are about this update. The best thing is that you can use all our existing features with these new templates! For example, you can live collaborate with others on a Gatsby template or quickly create a new post for your Next.js website using our GitHub integration.

Go check out what templates we fully support here: https://codesandbox.io/s.

One template we added is ReasonML! We don't execute ReasonML on the server, but in the browser. We are still testing Reason and could use all your help, so if you find anything out of order don't hesitate to send us an issue!

We can only test CodeSandbox Containers fully when we have other people using it. So we currently give the warning that CodeSandbox Containers is in beta. Please don't use it for any project with files you don't want publicly exposed. There's also the chance that the service might be down because of things that we haven't foreseen yet, in which case you'll see a nice warning message. If you notice this happening and want to know what's going on, you can find us here.

We will dedicate the coming months to squash every bug we can find, when we think that CodeSandbox Containers is stable enough to remove the beta warning we will announce this. In the near future we will also work on more documentation about containers so that there can't be any confusion in the differences between client and server sandboxes.

There is no way to sync the changes from the terminal back into the sandbox itself yet. This is top on our priority list and we will get this in as soon as possible!

We've been working on this functionality since February now and are extremely happy that we can share this with everyone now.

There are some people that deserve a huge thanks for this endeavor.

We want to thank Bogdan Luca for building the whole infrastructure for CodeSandbox Containers, this is an incredible undertaking and he pulled it off.

We also want to thank Gatsby for inspiring us to start this and for being both our counselor and funder of this project. Kyle Matthews and Sam Bhagwat were extremely supportive and helped us think everything through while also relieving us of other worries.