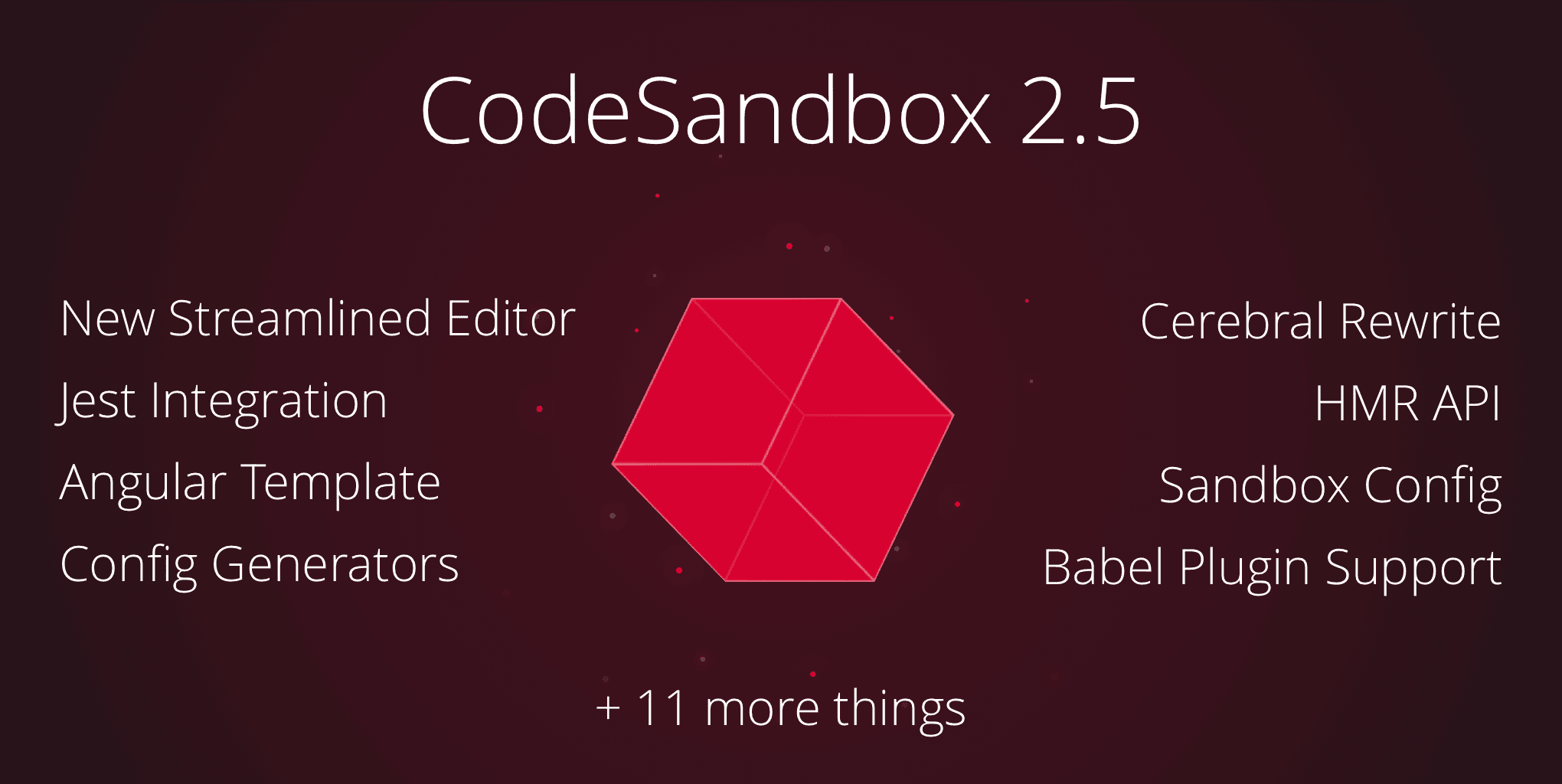 It's February and high time for a new big update for CodeSandbox! We've been very quiet the past month, but we were not sitting still. This update is packed with new features, I believe this is the biggest update to date, by far. And the best part is that many contributors helped with this update!

We have more than 20 new features, a redesign and a rewrite to show, so we better get started!

As time passed by our UI became more and more cluttered. We lost simplicity for feature abundance and oftentimes it was hard to navigate and find the right button. We absolutely don't want this and used this as an excuse to go on a spiritual trip and redesign the editor 👨‍🎨. Again, like the homepage, we received a lot of help from Danny Ruchtie, props to him! 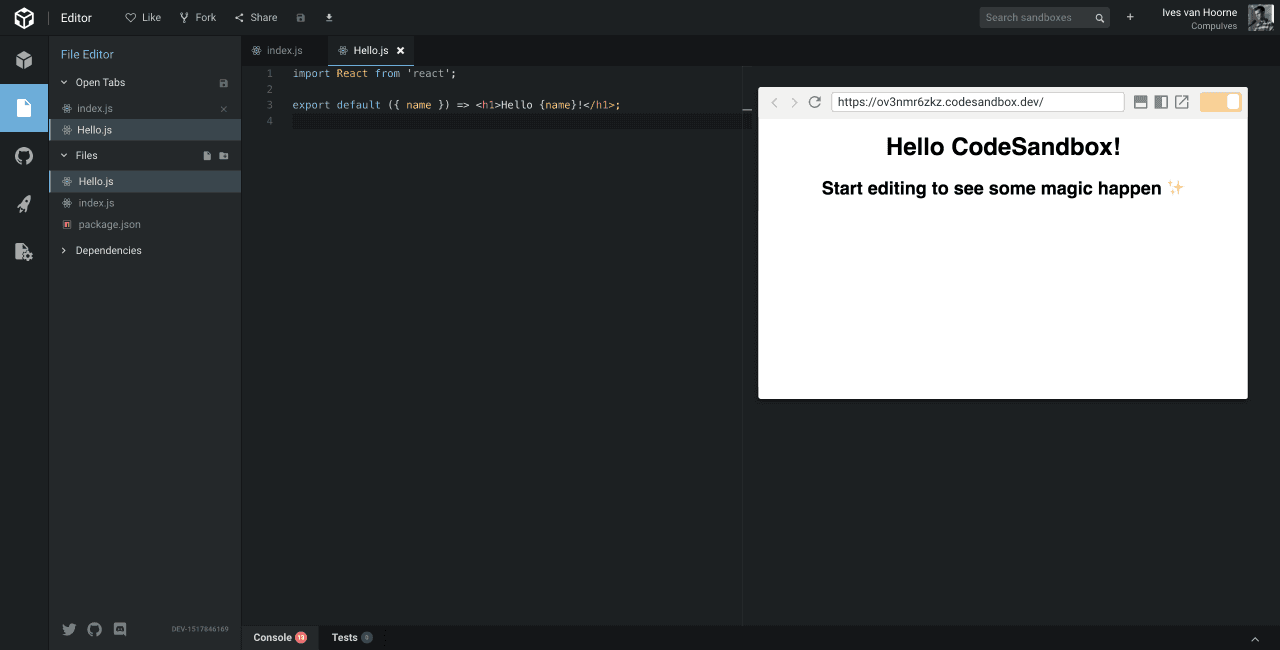 A big improvement against the clutter is our new sidebar, inspired by Visual Studio Code. We now categorize all functionality under their function: 'Project Info', 'File Explorer', 'Deployment', 'GitHub' and 'Configuration Files'. The sidebar is only enabled when you're looking at your own sandbox.

We noticed that a lot of functionality was only really useful when you were editing your own sandbox. That's why we decided to have a separate 'View Mode'. This mode only shows the sandbox info, the files and the dependencies. 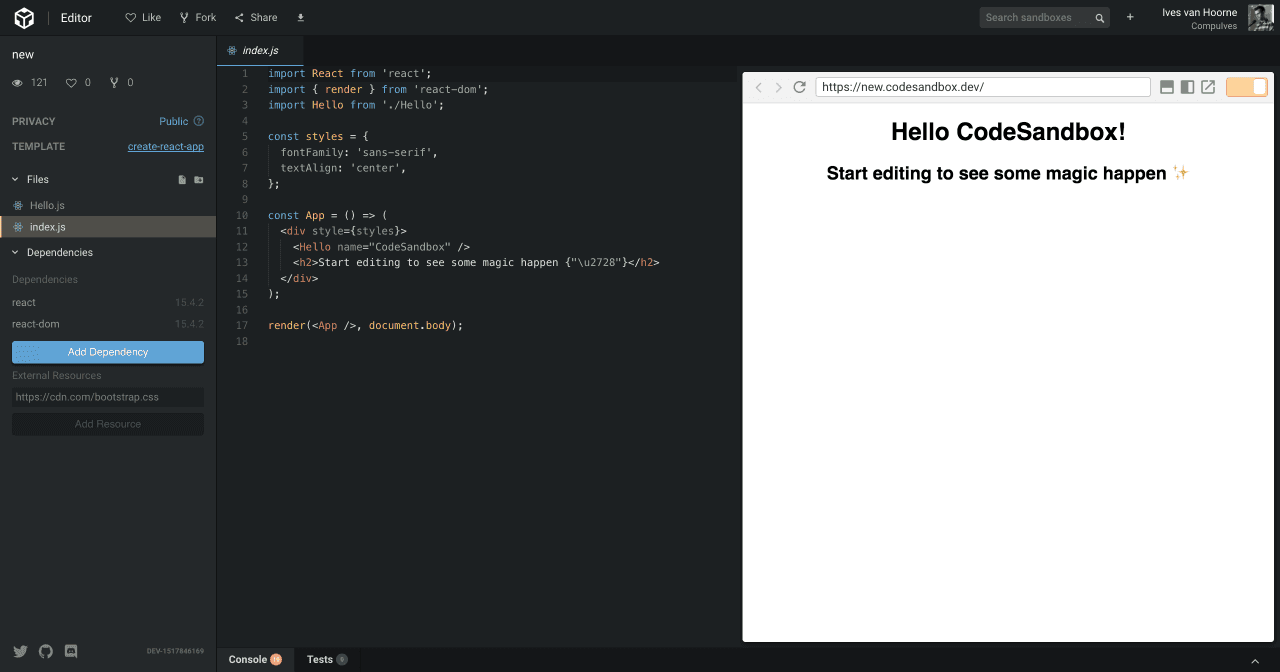 Our console input received a big upgrade thanks to the work of Xiaoyi Chen (also the author of react-inspector). You can write multiline commands and now we also syntax highlight and autocomplete your inputs!

When we released CodeSandbox I got in touch with Christian Alfoni, the author of Cerebral and WebpackBin. We started working together on many different projects, and eventually started toying with the idea of converting CodeSandbox from Redux to Cerebral. Christian started working on this about three months ago, and it's finished now! 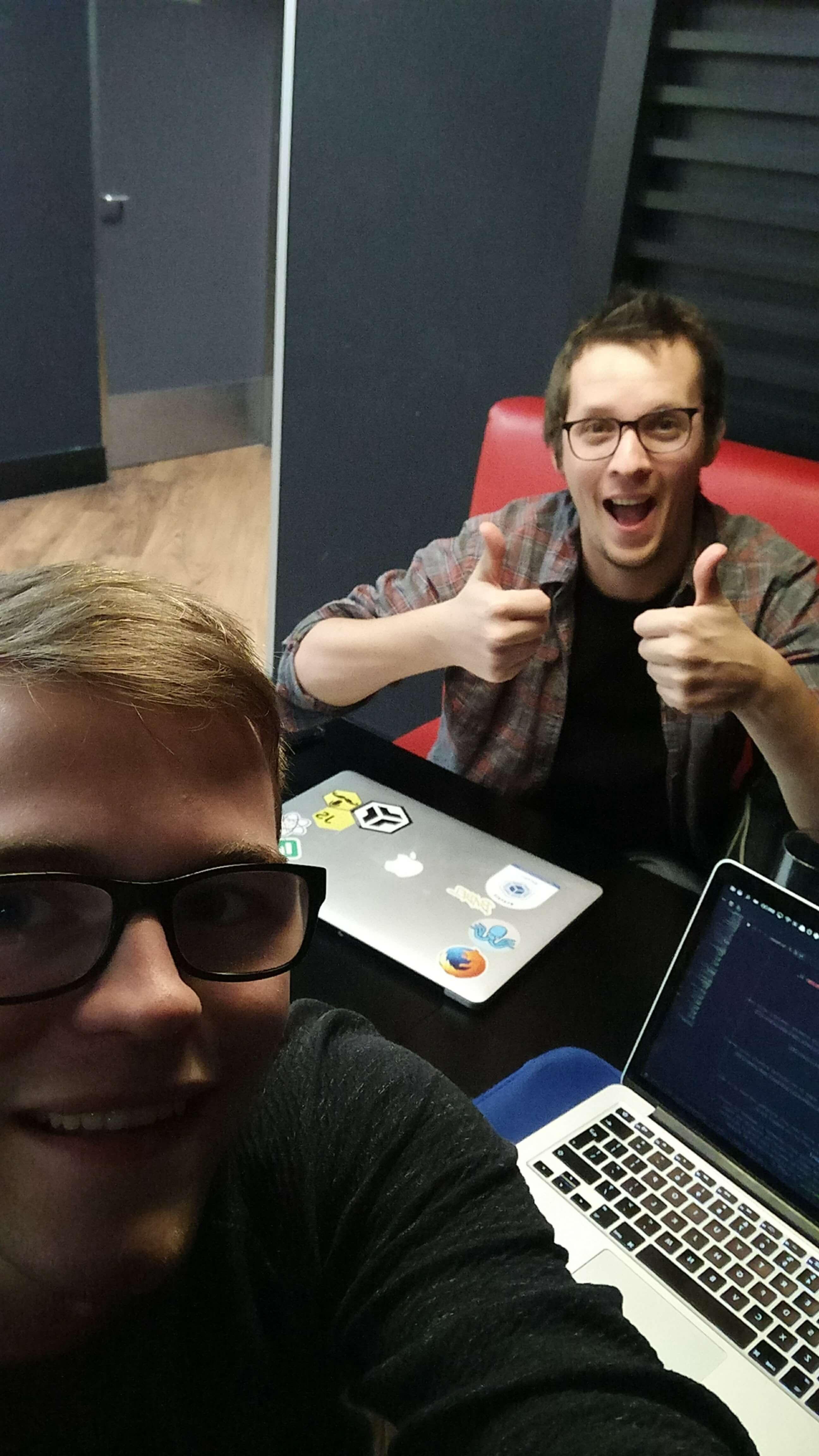 We now use Cerebral for state management, backed by mobx-state-tree. This gives us the declarative functional composition of the CodeSandbox application logic and typed observable state values for optimal rendering out of the box. It has resulted in more performance and a reaaaally nice debug view! 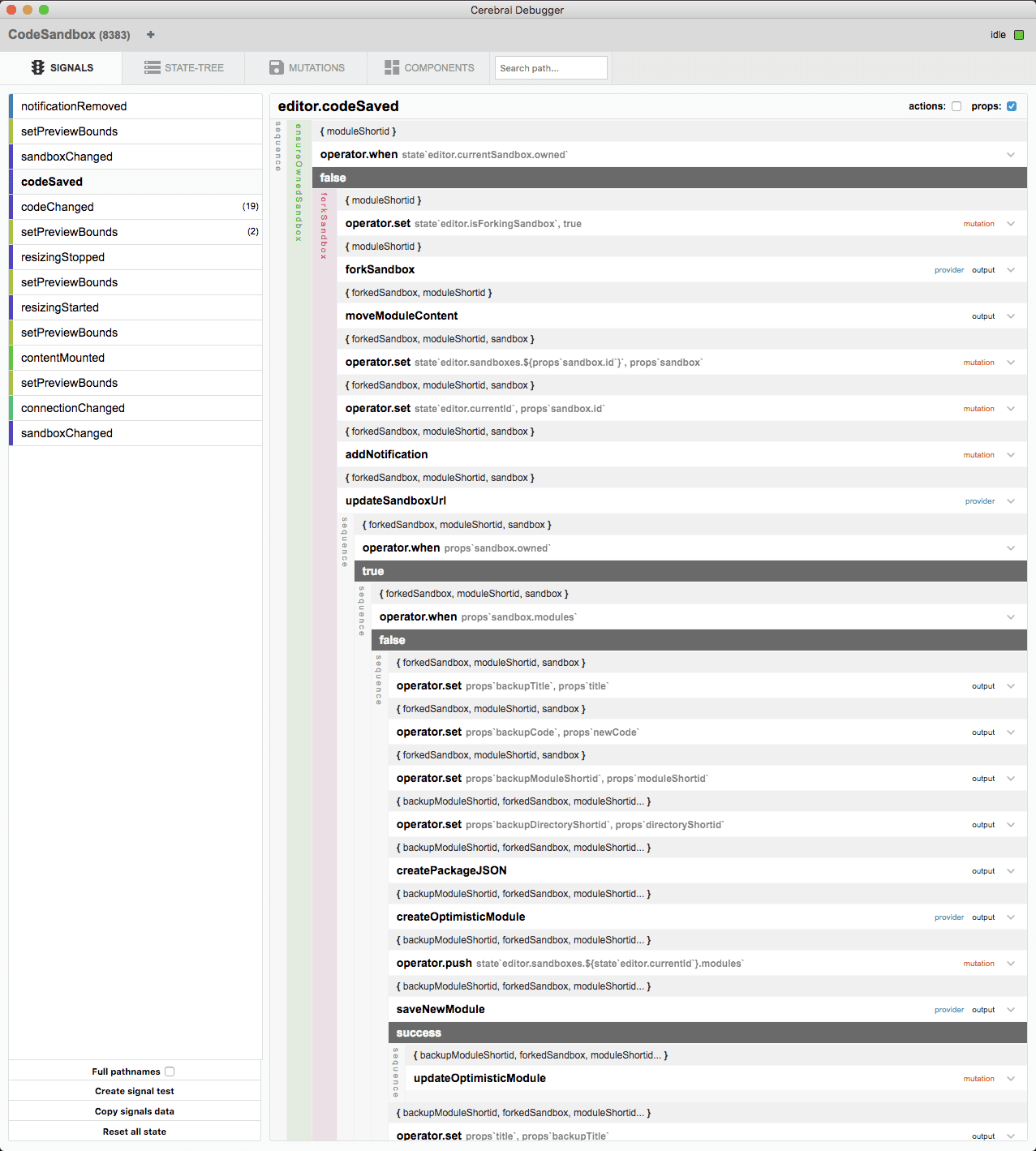 During the rewrite we also took the opportunity to implement several new optimistic updates for a smoother user experience.

You can read more about the complete rewrite here.

Our stance on configuration is quite simple; configuration means that the program is too stupid to determine what the user wants. Oftentimes you can satisfy 90% of the user preferences without configuration.

However, there is still the other 10%, CodeSandbox as an application is a good example of this. That's why we are introducing official support for configuration files. Depending on the template, you can configure several aspects of your sandbox. The configurations we currently support are: package.json, .prettierrc, .babelrc, sandbox.config.json and .angular-cli.json. 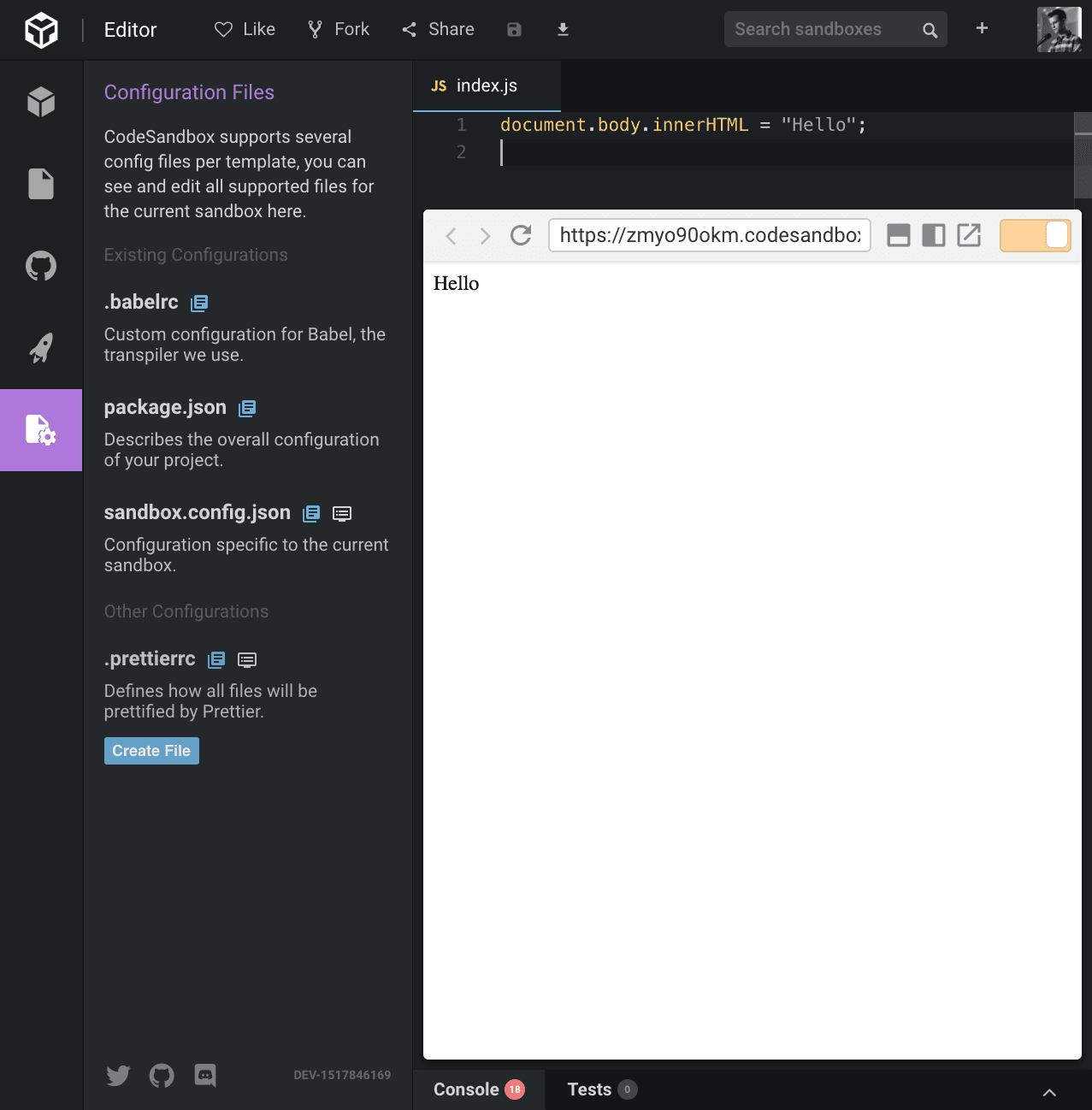 We previously saved dependencies, titles, etc. separately in our database. When you'd import a sandbox from GitHub we would get every relevant field from the files and save them manually in our database. This creates friction: when you add a dependency we need to manually update the database and update package.json.

From this update on we make the files our source of truth for almost all data, this means that sandbox data is parsed from package.json and other relevant configuration files live in the editor. We add this retroactively; when you open a sandbox we automatically generate a package.json if it doesn't exist. 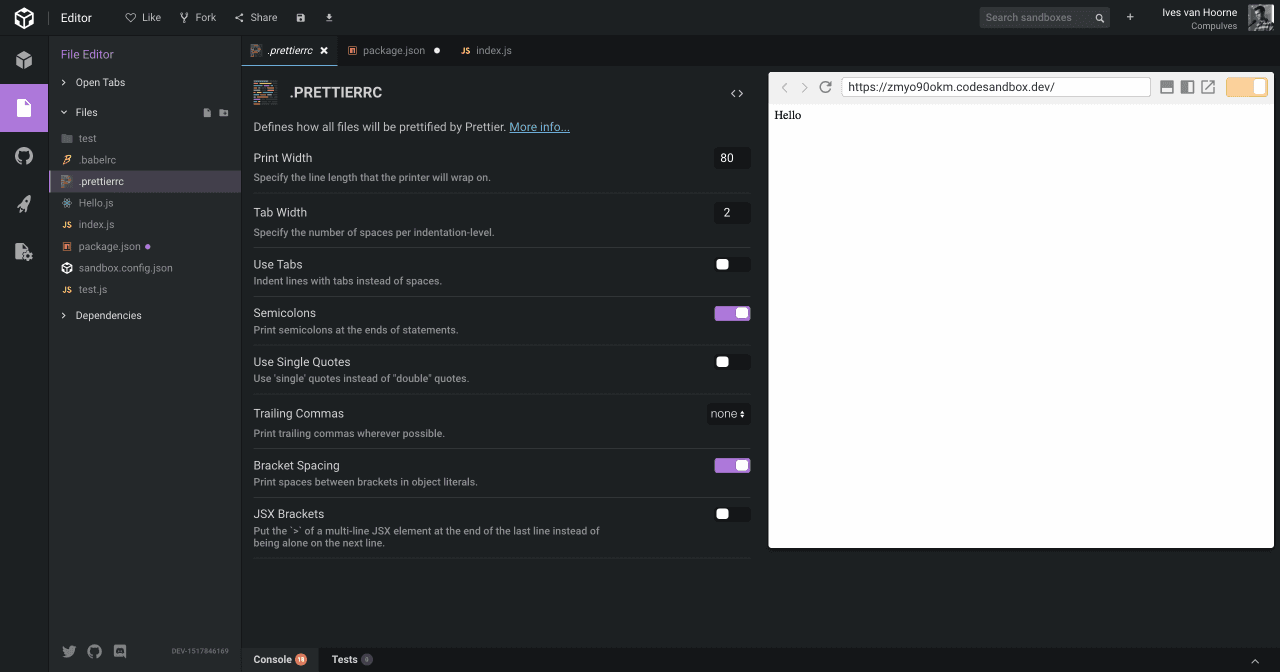 A much requested feature was custom Babel plugins support, not only the official ones, but also community plugins. We now allow the configuration of .babelrc in the Preact template and will soon enable this in Vue and our upcoming 'Custom' sandbox. A cool addition to this is that we support the fs interface. This is especially useful for Babel plugins like babel-plugin-preval. Go ahead and try it!

Advanced Babel plugins like babel-plugin-macros that use fs are currently in beta. We will streamline Babel plugin support over the coming weeks, with a custom UI to search for plugins and the ability to create and select presets. 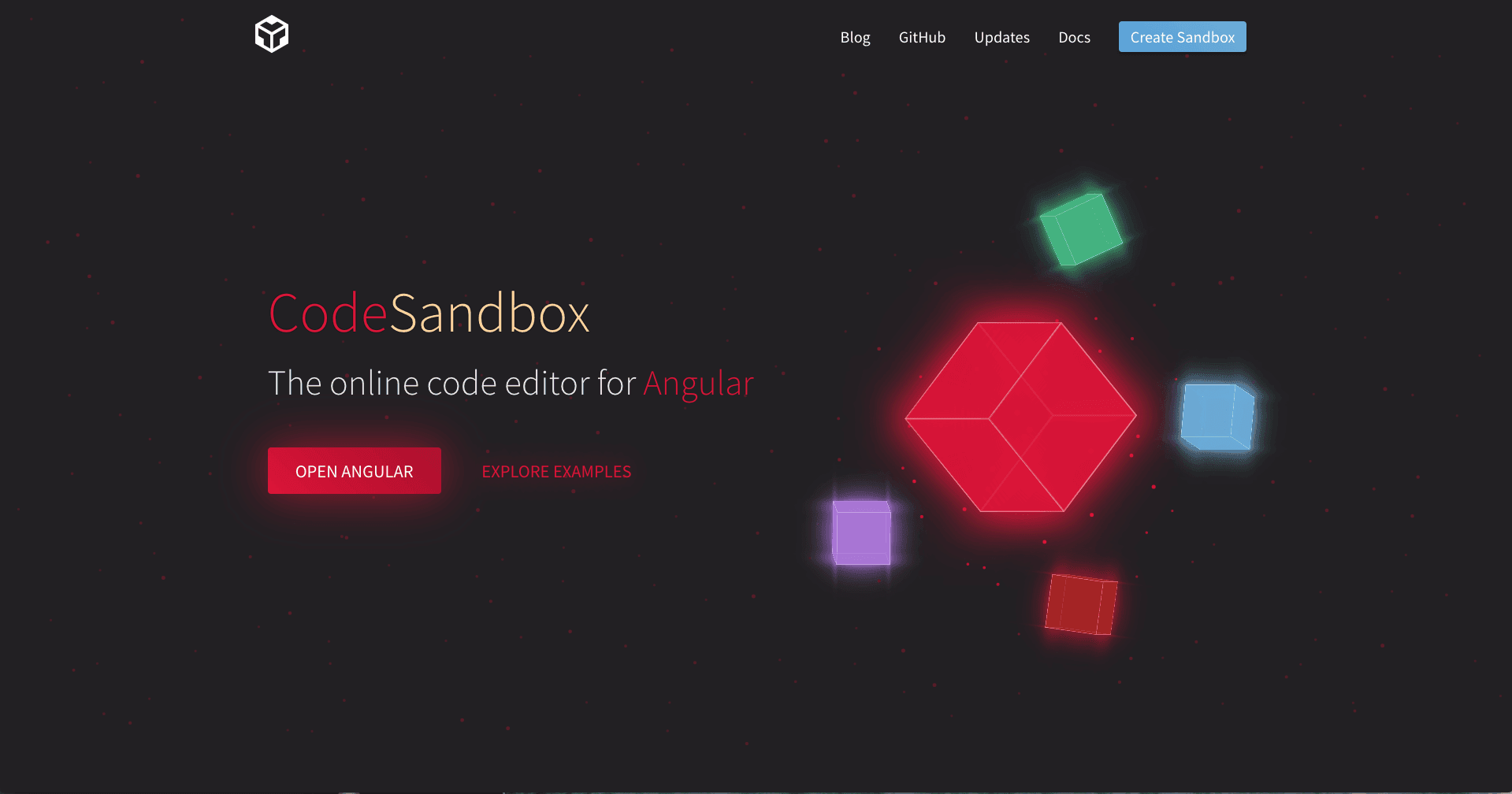 Official Angular support was an often requested feature from day one. We now officially support Angular templates, including the corresponding angular-cli.json file that comes with it!

Give it a try here:

Or open it in the new editor!

We now have Jest support, mainly thanks to Gautam Arora! Gautam opened an issue for Jest integration about 2 months ago, and about a month later he opened a PR with a version that already could run all tests of the Redux examples.

The past week I've been working a native UI for Jest that fits with our redesign, and I'm really proud of how it turned out. I took inspiration from Majestic and Storybook. Let's see what it looks like. 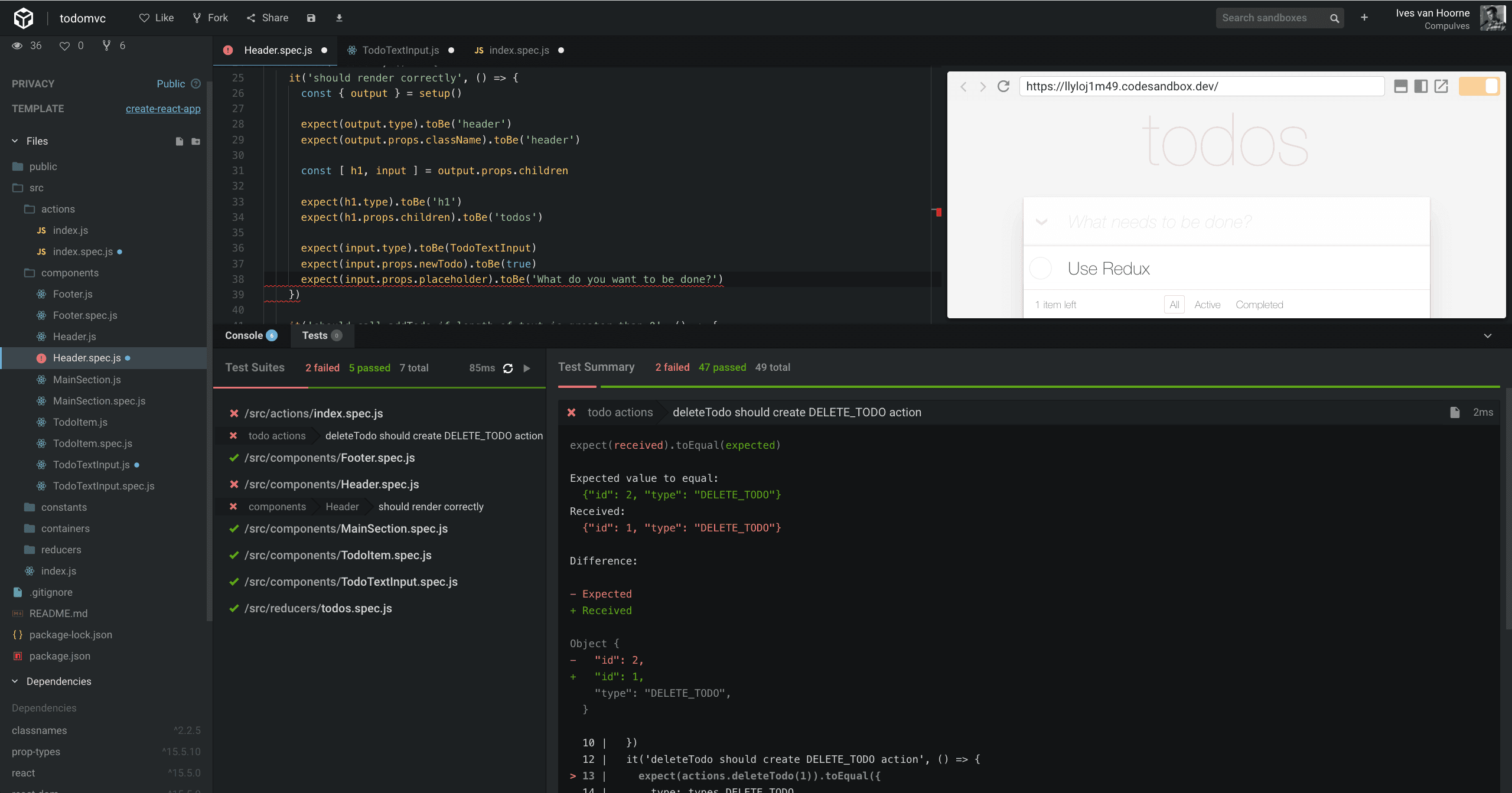 As you can see the files with tests are in the left navigator. When you select a test file you get the details of that file, including statuses and eventual errors.

We automatically watch all test files. If you change a file we will only rerun the tests that require this file, either directly or indirectly. We also support snapshot testing, though we're still working on the possibility to save new snapshots. 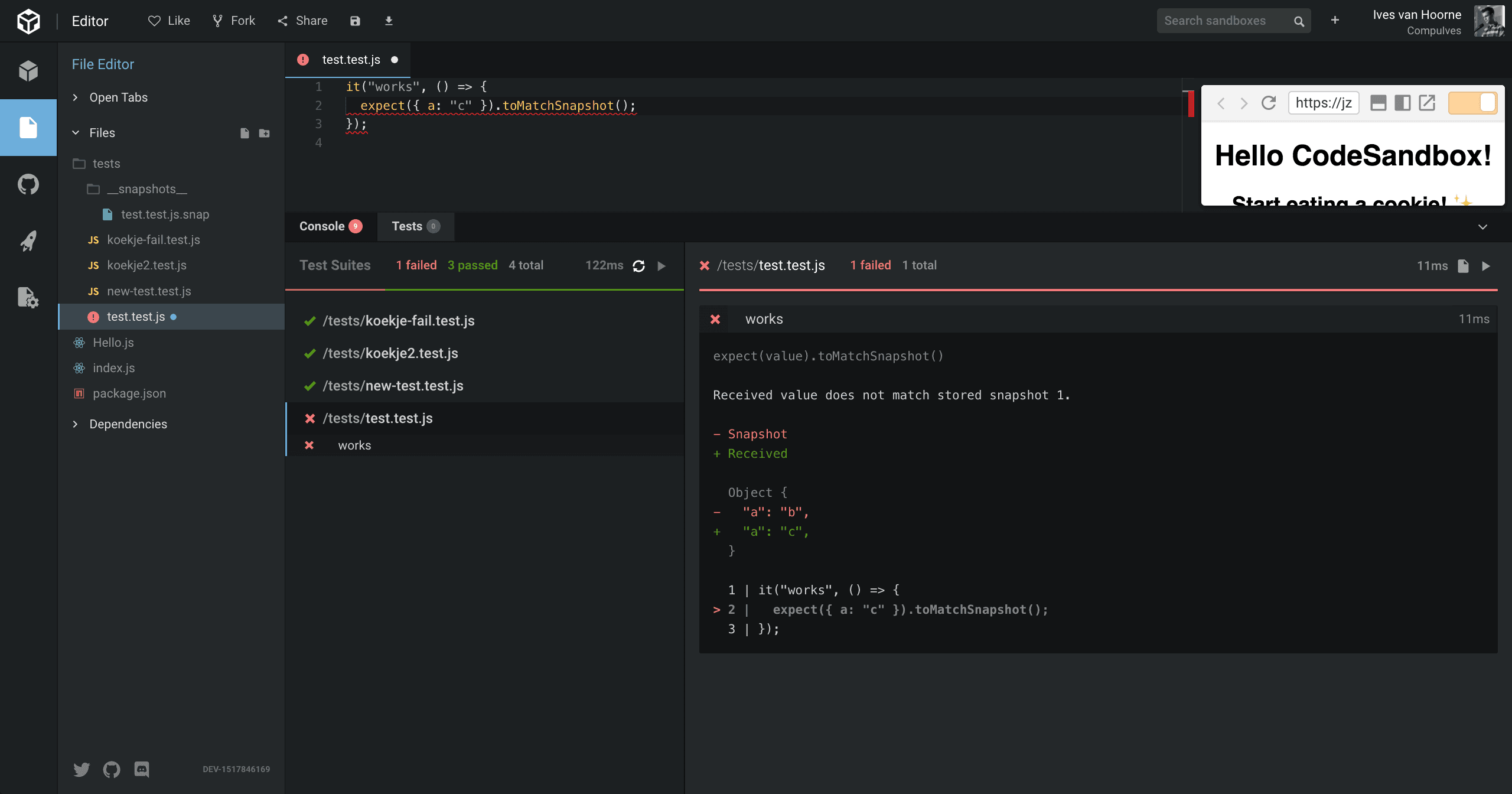 I'm really proud of the integration with Jest, and it was only possible because the Jest team did an incredible job by publishing all their functionality in separate packages. We just cherry picked the packages that we needed to make Jest work in the CodeSandbox! The Redux TodoMVC example is a good sandbox to play with Jest support.

Note that this is not fully native Jest, we don't support writing snapshots, manual mocks using the __mocks__ directory and Jest configuration yet. We will add this soon though.

I did some upgrades to the bundler of CodeSandbox, the most notable improvements are caching and an official HMR API.

After every successful bundle we cache all relevant transpilation and files in IndexedDB. When you refresh the sandbox you only need to actually evaluate all the files instead of doing transpilation etc. This results in very fast initial load times, as you can see in this GIF.

We also now have official HMR support (finally!). You can use the module.hot API like in webpack, this is useful for when you want to preserve state between runs for example. We also added official support for the HMR API in our Vue loader, this means that Vue gets proper HMR out of the box!

We've had many updates recently. Here's a quick recap of some changes that happened in December:

Zen mode hides all distracting elements, therefore it's perfect for presentations and course videos. You can enable it in preferences or by the keybinding. 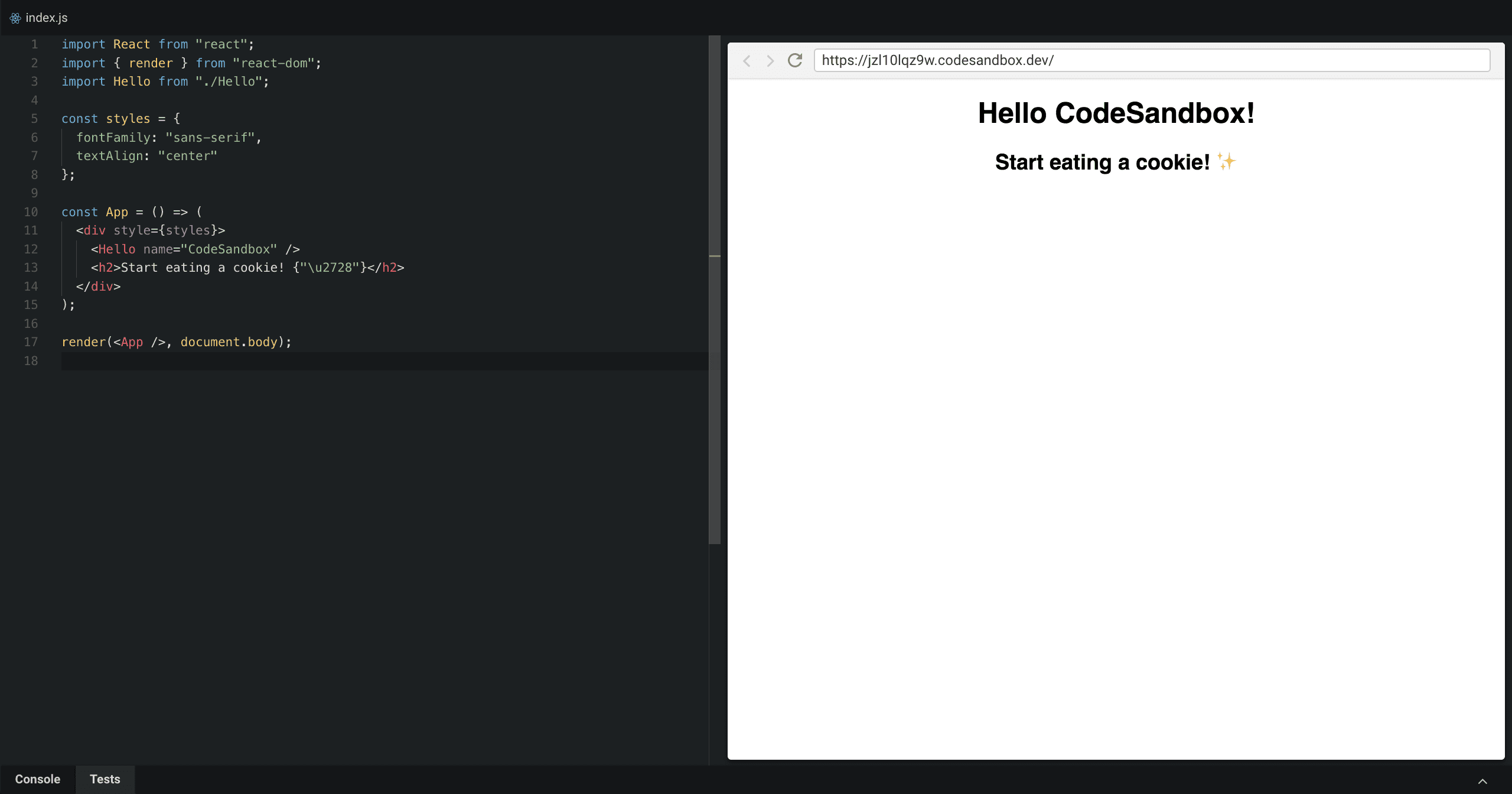 You can now set up custom key bindings for actions in CodeSandbox! 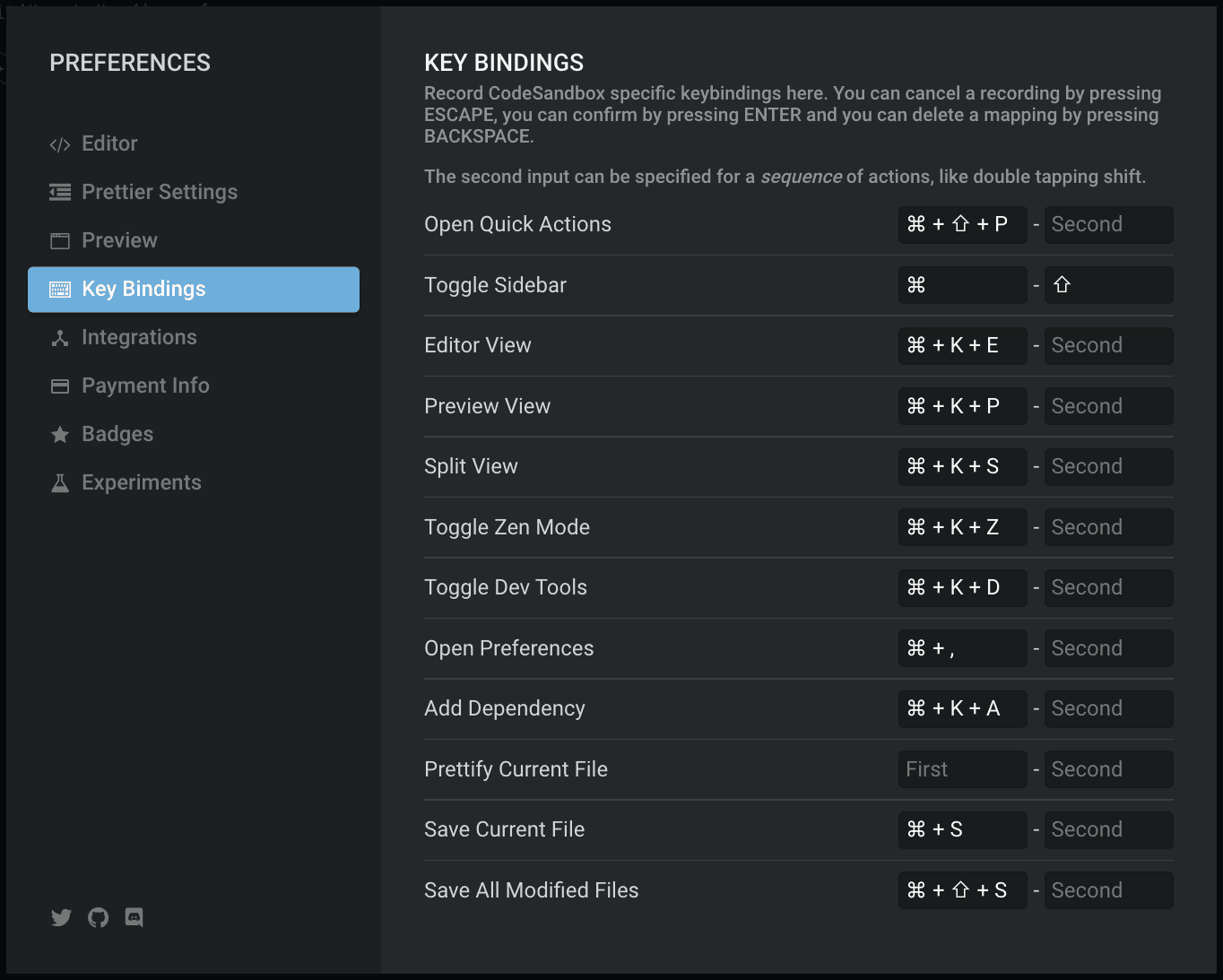 Quick Actions can be activated with (CMD/CTRL)-Shift-P and will show this as popup. 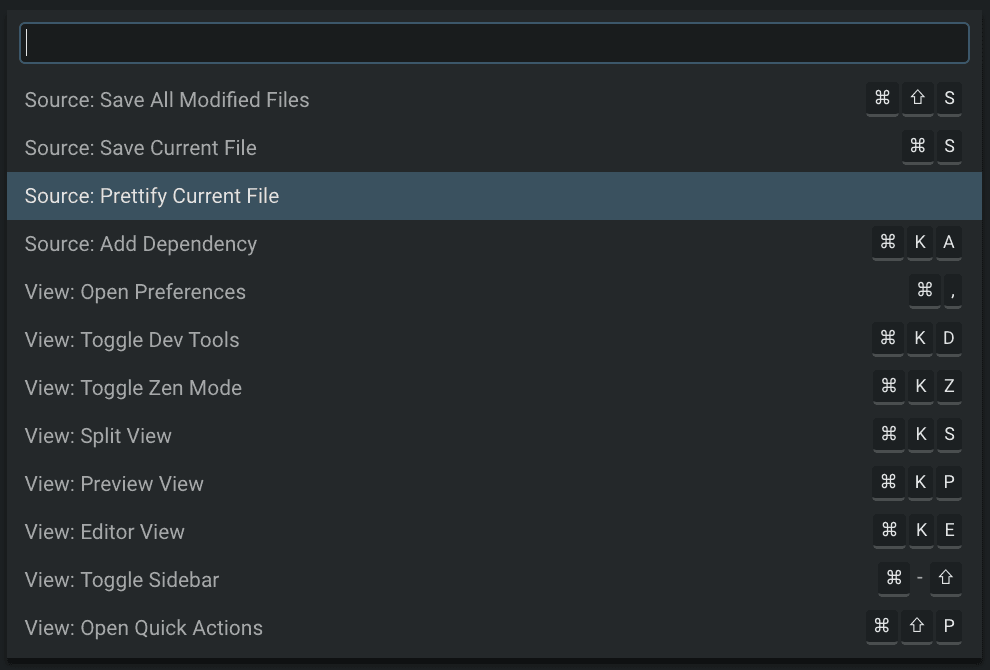 It allows you to quickly active actions without touching your mouse or remembering a key binding.

To answer questions or explain CodeSandbox concepts we now have an official documentation.

You can follow either CodeSandbox or me on Twitter to keep up to date with any changes. We also keep a changelog here.

Oh well, that was a big list of changes... The coming week I will concentrate mostly on my talk at Vue Amsterdam and fixing any bug that may pop up. However, we do have some exciting plans for the coming time!

We have support for many transpilers right now, but there is no template that supports all of them. We've seen that users want to experiment with different things like Babel plugins, but don't want to tie their sandbox to a template that's not related to their project. That's why we'll implement something called a Custom template in the near future. I've already done some work on this feature and wanted to release it with 2.5, but ran out of time. Bottom line is, it should be done soon 😃.

We have grown a lot since we started. We want to have more scalability, so we will move our hosting over to Kubernetes.

We are also starting a big project that will start this February and will continue for the coming 3 months. I can't give any details on that project yet except for saying that it's an exciting change.

This update received a lot of support from contributors of CodeSandbox. I'm really thankful for all the work from others, and I'd like to especially thank Bogdan Luca, Christian Alfoni, Danny Ruchtie and Gautam Arora for their work and support on this update. 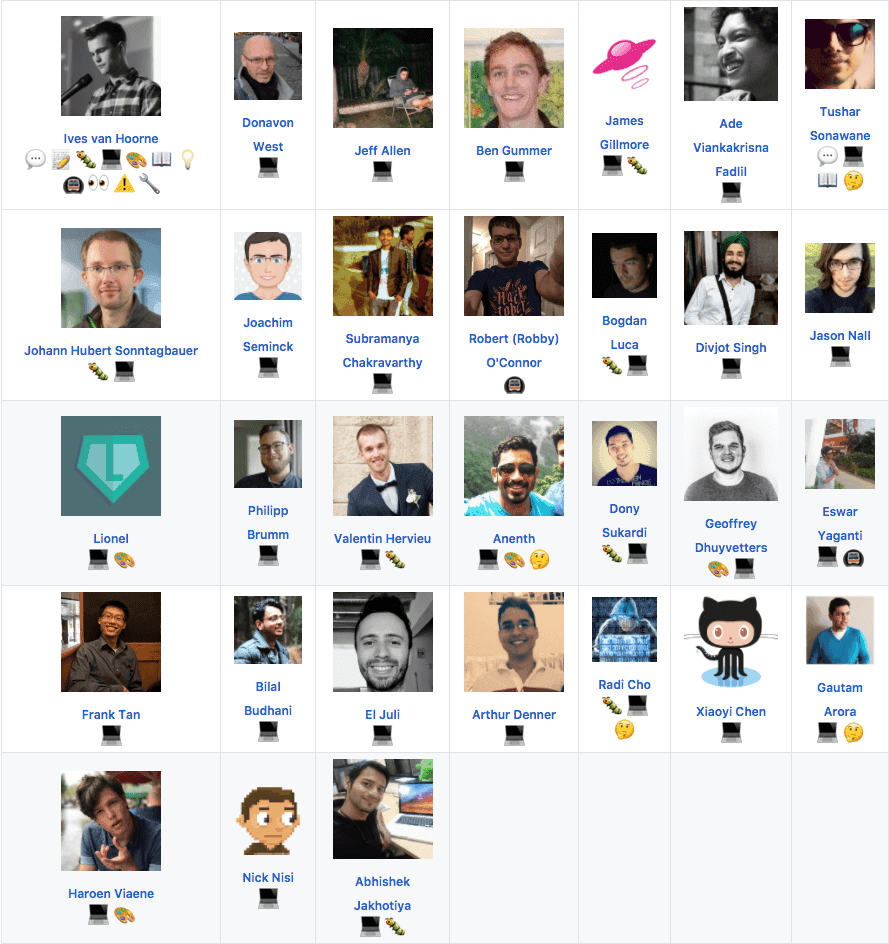 Want to get involved?

We're 90% (soon 100%) open source! We welcome any help with open arms. If you're interested in helping out, I recommend you to check out our client repo.

If you want to chat, we have an active Spectrum community.

Also, if you would like to support CodeSandbox financially, you can become a CodeSandbox Patron!